PokerStars is running a week-long promotion with more than $80,000 in cash prizes being given away to increase the profile of its Stud and Draw games. 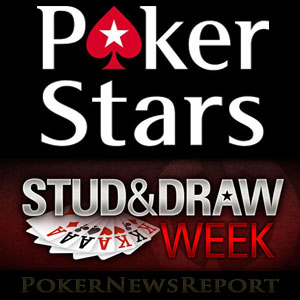 PokerStars is running a week-long promotion with more than $80,000 in cash prizes being given away to increase the profile of its Stud and Draw games.

[geolink href=”https://www.pokernewsreport.com/pokerstars”]PokerStars[/geolink] is well-known for its comprehensive range of online poker games; but sometimes the less popular games get ignored by players who prefer to stay within their comfort zone and compete in disciplines they are more familiar with.

This week, PokerStars is giving players the opportunity to extend their range of poker skills by offering a series of bonuses, challenges, promotions, and Happy Hours specifically geared towards their Stud poker and Draw poker games.

For players who have never tried their hand at Stud poker or Draw poker, here is the perfect opportunity to become familiar with these poker disciplines for free! Up until 23:59 ET on Sunday 31st May, PokerStars is giving away five $1.50 tournament entry tickets to every player making a deposit of $30.00 or more into their PokerStars account.

Players wishing to take advantage of this opportunity should use the PokerStars bonus code “STUDDRAW” when making their deposit, and don´t worry if you do not have the time to play in five poker tournaments before the end of the week. The tournament entry tickets will remain valid throughout the months of June and July.

Every day through Stud & Draw Week, PokerStars will be hosting an “All-in Shootout” with $3,000 in prize money up for grabs. In order to win a seat in the following day´s Shootout, all players have to do is complete a “Beat the Clock” Challenge of winning ten cash games of Stud poker or Draw poker within an hour.

The “Beat the Clock” Challenge looks simple enough, but remember that there may be thousands of other players also aiming to win ten hands within the same hour! Our advice is to play multiple tables at the same time so that you only have to win a couple of hands on each (and don´t forget to start your challenge before sitting down at the tables!).

On Monday 1st June, PokerStars will be hosting four valuable $7,500 “All-in Shootouts” which players can win seats into by completing up to four week-long challenges. The four challenges do not appear too difficult unless you are reading this article on Sunday night and only have a few hours in which to complete them:

Please note that these challenges relate to cash game action only and exclude Heads-Up tables. To make sure you qualify for the $7,500 “All-in Shootouts”, remember to start the challenges when you next log in to the PokerStars desktop or mobile client.

If the above was not enough to get you racing over to the Stud poker and Draw poker tables, PokerStars will also be running four simultaneous leaderboard competitions – each one offering more than $5,000 in cash prizes to the top 150 players. Places in each leaderboard competition will be determined according to:

Added Prizes in the Weekly Tournaments

The “Weekly Tournaments” are the big events for less popular disciplines of poker, but they still get a sizeable field; and, with the buy-in being $82.00, the prize pool can quickly add up. This coming weekend there are even more reasons to play in the tournaments as, ten minutes into each game, PokerStars will be picking two tables at random and awarding $100.00 in cash to each player seated around the table. That´s your buy-in back and some small change for a pizza and a beer!

The qualifying weekly tournaments this coming weekend are:

If you are not certain about how to play these disciplines of online poker, a full selection of rules appears on the PokerStars website. For some free tips for Stud and Draw games, tune into PokerStars´ Twitch channel every day between 12:00pm and 1:00pm (ET), where one of PokerStars Team Pros will be live-streaming games of Stud poker and Draw poker (during Happy Hour!).