Sunday was Australia Day at the Aussie Millions in Melbourne, but nobody told Mustapha Kanit and Lorenzo Sabato, who won the first two events of the series. 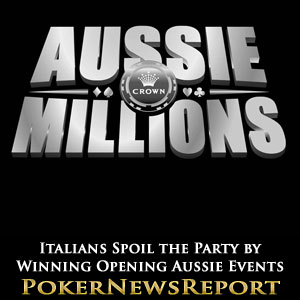 Sunday was Australia Day at the Aussie Millions in Melbourne, but nobody told Mustapha Kanit and Lorenzo Sabato, who won the first two events of the series.

The climax of the first two events in the Aussie Millions series were played out on Sunday at a very festive Crown Poker Room in Melbourne; where hundreds of natives were celebrating the day that the British first arrived at Sydney Cove in New South Wales with a boat-load of convicts.

Sunday´s action was a smash-and-grab of a different nature, as close friends Mustapha Kanit and Lorenzo Sabato from Italy took down Events #1 and #2 of the Aussie Millions series for a combined “steal” of AU$230,200 (US$ 200,985).

Mustapha Kanit went into Sunday´s final day of the opening event with a massive chip lead after his pocket Aces held to bust out two players with Ace-King during the last level of Saturday´s third opening flight. He maintained his chip advantage through the 108-player bubble and onto the final table where, when the game went six-handed, he had more than half the chips in play.

However, by the time that Canadian poker player David Lim bust out New Zealand’s Darryl Hussey in third A♦ 8♣ > A♣ 3♥ to set the heads-up climax to the event, the chip stacks were fairly equal between Kanit and Lim, and a deal was agreed that left the trophy and the glory to play for. Thereafter the chips only went in one direction and quickly gaining a 3:1 chip advantage, Kanit was able to sew up the opening event of the 2014 Aussie Millions when his A♠ 9♠ held against Lim´s A♦ 7♣.

Lorenzo Sabato Doubles Up in Event #2

Before the chorus of “Viva l´Italia” had finished, the Italian contingent in the Crown Poker Room were celebrating a second Aussie Millions victory when Lorenzo Sabato won the AU$1,100 buy-in NLHE/PLO Event #2. Although a much smaller event in terms of numbers (163 played in Event #2 as opposed to the 1,302 who competed in Event #1) the win was important for Sabato as it was his first since his victory at the Barcelona Estrellas Poker Tour Main Event in August 2012.

Like Kanit in the opening event, Sabato had been the chip leader when the final table was set but, after busting out four players at the final table, he held a substantial 6-to-1 chip advantage over his heads-up opponent Oliver Gill. Gill managed one double-up to reduce the deficit, but Sabato won the event in the next Pot Limit Omaha round when his A♦ A♠ K♥ Q♣ improved to a Full House against Gill´s A♣ K♣ Q♠ 2♥.

Finally, an Aussie Winner in Event #3

Event #3 of the 2014 Aussie Millions was an AU$1,100 Shootout tournament and, after the first round of action, nineteen survivors sat down together to compete in an MTT to determine who would win the gold ring and AU$35,055. The final table of ten was set late on Monday evening, led by Sam Vakili, but with the average chip stack being only 20 Big Blinds at the time, Vakili was bust in sixth by Steven Swalling A♦ J♦ > K♠ 10♥ in a frantic climax to the event.

Swalling went from chip leader to busto in fourth place at the hands of Tyron Krost J♦ 8♦ > Q♣ 5♦, but Krost was soon crippled by Mauro Sassano (A♦ 9♣ > K♦ Q♥) and then bust in second by Elizabeth Montizanti A♥ 4♦ > K♥ K♣. Sassano and Montizanti split the prize money and left AU$2,000 to play for, after which both players shoved all-in and Mauro Sassano´s A♥ K♦ triumphed over Elizabeth Montizanti´s K♥ J♠ for Australia to claim their first Aussie Millions champion of 2014.