It´s Tight at the Top as Siebert Leads WPT Montreal

Sylvain Siebert has a chip lead of less than 2 Big Blinds as the final six players prepare for the climax of the record-breaking WPT Montreal Main Event. 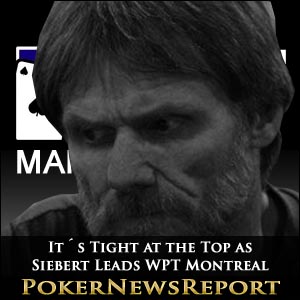 Sylvain Siebert has a chip lead of less than 2 Big Blinds as the final six players prepare for the climax of the record-breaking WPT Montreal Main Event.

Day 3 of the WPT Montreal saw the remaining 45 players play down to a final table of 6 and, as all 45 players were assured of a $12,535 min cash, it did not take long for the chip stacks so carefully nurtured on Day 2 to come tumbling down. However, whereas in most tournaments it is usually the short-stacks picking the wrong moment to commit their chips to the pot, there were some real cooler hands yesterday.

Don’t You Just Hate it When …

Cory Bath was all-in pre-flop and 60% favourite with A♥ K♦ against Kalpesh Raichura (8♥ 7♥), only for Raichura to flop a 9 high straight (Bath out in 41st), while Dean Murphy (A♣ J♣) was an even stronger favourite to double up against Tommy Velliama (10♥ 9♥) but managed to miss everything and depart in 38th when Velliama hit the 10♠ on the turn, and Pascal Lefrancois (K♦ K♠) hit a two-outer King on the turn to keep his tournament life against Josue Sauvageau’s flopped Set of Nines – Lefrancois ultimately making it to the final table.

After one level of play, ten players had bust from the tournament and 35 remained.  New chip leaders emerged with great regularity and included Tommy Velliama (K♦ J♠), who flopped an Ace high straight and busted Mike Timex MacDonald in 27th (A♦ 10♣ for two pair), Jonathon Roy whose Q♣ Q♦ held up against Timothy Adams’ K♠ J♥ to climb to 3.75 million chips and Sylvain Siebert – who got all his chips into the middle with A♠ 3♠ against Francois Billard (10♣ 10♥) and chipped up to 4.25 million when the Q♠ on the turn completed his flush.

Those Hungry for Success Include …

Jeff Gross moved into a clear second position when his 10♦ 10♠ was good enough to eliminate Josue Sauvageau´s A♦ 5♥ and Jonathon Roy took an overnight third position when Kuong Chhe Kuoch ran his A♥ K♠ into Roy´s A♣ A♠. Gavin Smith´s charge up the leaderboard came to an abrupt halt when Peter Kaemmerlen (K♠ Q♦) rivered two pairs to master Smith´s 8♦ 8♠, and the final table 1-2-3 was confirmed when Jeff Gross rivered trip Sixes to eliminate Gabriel Fernandes (J♦ 6♠ > Q♥ 10♥), Sylvain Siebert´s pocket Jacks held against Martin Raus´ A♣ K♦ and Serge Cantin chose the wrong moment to shove the last of his chips into the pot – his A♦ J♥ running into the A♥ K♠ of Jonathon Roy.

All six players are assured of a six-figure payday after the WPT Montreal Main Event attracted 1,173 entrants and, in addition to the prestige of joining the WPT Champions Club and winning a seat at the Champions of Champions Main Event, the winner will collect the $779,710 first prize. With blinds of 60,000/120,000 – ante 10,000 when play recommences at the Playground Poker Club, Gavin Smith looks to be in trouble but, as we have already seen in this tournament, sometimes the cards play out in a way other than you might expect them to.