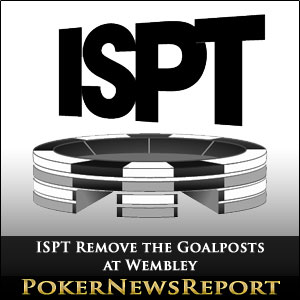 This article has been edited at the request of ISPT tournament director Stephen McLean who believes we misinterpreted his comments with regard to the ISPT venue.

PokerNewsReport yesterday published an article based on a post on the Irish Poker Boards web site in which Stephen McLean had written “Its being played in the conference centre at Wembley Stadium”.

Our interpretation of this post led us to believe that The International Stadiums Poker Tour was no longer going to be hosted on the hallowed turf of Wembley Stadium and instead played “in the conference centre at Wembley Stadium”.

In our enthusiasm to bring readers of PokerNewsReport breaking news from a credible source, we failed to seek confirmation of this fact from the ISPT press office (who have always been a credible source of information), who have now issued a statement to say that the tournament will indeed be played “sur la pelouse.”, on the lawn of the Wembley Stadium.

Feel free to leave a comment with your thoughts in the comment box below, or at the ISPT thread at 2+2.

2 replies on “ISPT Remove the Goalposts at Wembley”

Thanks for your message and your interest in the International Stadiums Poker Tour, the major poker event happening in London in May. Further to the Pokernewsreport article published today regarding where the ISPT will take place within Wembley stadium, we felt it necessary to clarify a number of misgivings and factually wrong information contained in it.

Just to be clear, The Main Event is programmed to happen on the Wembley turf. Therefore, we hereby confirm that the tournament will happen ON the Wembley pitch and not in the stadium’s conference center, as falsely reported in your article.

All ISPT staff are available to answer all your questions, which will enable all your readers to have real editorial information.

As for our estimates/ambitions, a special press conference will take place in a few days time live from Wembley and will answer any questions you may have about the event.

Having said all this, I invite the Pokernewsreport site to check all its information before publishing, like any good journalist would.

Good luck.
See you at Wembley.

The article has been changed to reflect the current status.