The International Stadiums Poker Tour gets into first gear this weekend as the initial online Day 1s take place in France and satellites are launched elsewhere. 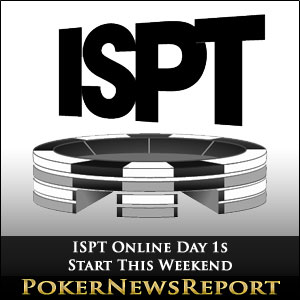 The International Stadiums Poker Tour gets into first gear this weekend as the initial online Day 1s take place in France and satellites are launched elsewhere.

We may or may not have a better idea after this weekend about whether the International Stadiums Poker Tour (ISPT) in Wembley is likely go ahead after MyPok.fr hosts the first Day 1A of the event on Sunday and satellites to online Day 1s hosted on other sites get started.

Satellites to MyPok.fr´s initial ISPT online Day 1A have been running for some time on the site (only one of two skins on the Partouche Poker network), and direct buy-ins for €300.00 are also available until the scheduled start time of 9.00pm (CET- no late registration).

However, with the first of the Day1As scheduled in competition with the Sunday majors, and the Partouche Poker network having an average 7-day traffic level of less than 200, the tournament itself is unlikely to give a strong indication of what lies ahead for the ISPT.

Satellites on Lock Poker and Poker770

It is more likely that the response to the launch of satellites to later online Day 1As on Lock Poker and Poker 770 will provide a better picture of the appeal of the ISPT among the poker-playing public. Lock Poker have six ISPT satellites scheduled for Sunday ahead of their first online Day 1A next weekend, while Poker 770 are hosting two satellites each night of the week for their first ISPT online Day 1 which takes place on Sunday 17th February.

Ring-fenced poker players in Spain and Italy will also see the first satellites launched on Poker770.es and Netbetpoker.it, but these two small skins on their country´s iPoker networks rarely see a substantial amount of traffic, and it would be unlikely that their contribution to the overall number of players competing in ISPT online Day 1s would be of any significance.

Do the French, Spanish and Italians Have an Advantage?

Although it will be easier for players on the French, Spanish and Italian poker sites to qualify for Wembley (on the basis that there are six online Day 1s in each country and a maximum few hundred players in each – with those that qualify for Wembley in the first online Day 1s not bothering to enter the later Day 1s), poker players from those countries will not necessarily have an advantage when the live tournament starts for real at Wembley in June.

Players in each of the online Day1s start with 5,000 chips and, if you assume that no more than 200 players are going to compete in the online Day 1s in the countries which have ring-fenced player pools, the top 10% of players that qualify for the live Day 2 at Wembley Stadium in June are going to be bringing with them stacks averaging 50,000 chips – the same amount as players who buy-in directly into Day 2 for €3,000.

Compare that to online Day 1s on Lock and Poker770, which have a much larger player base, and the possible chip stack of players who qualify for the live event through these sites is likely to be almost double that of players qualifying via online Day 1s in France, Spain and Italy, or buying in directly on Day 2 – effectively giving the advantage to players from the rest of Europe and poker players from the States.

So, is the ISPT Going to be a Success?

This weekend´s action is likely to be inconclusive. If more than 200 players compete in the MyPok.fr tournament, organisers of the event will be hailing it as a huge success (they might even replace the €20 million guarantee!). However, if the MyPok.fr online ISPT Day 1 flops badly, organisers will point to the low player count on the Partouche Poker network and express optimism about future online Day 1s on other sites.

All we can do is wait and see. Poker News Report will keep you up to date, follow PNR on Twitter to stay informed.