ISPT marketing boss admits that ISPT Wembley is a non-starter without 15,000 players and Partouche will not guarantee the event taking place either. 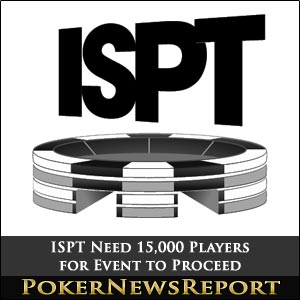 Since this article was published, Georges Djen – Head of Marketing for ISPT Wembley – has issued a statement claiming that his comments made to the German reporter who interviewed him were mis-translated. You can read what the statement had to say at “Djen Says ISPT Will Definitely Take Place”.

ISPT marketing boss admits that ISPT Wembley is a non-starter without 15,000 players and Partouche will not guarantee the event taking place either

Just when the International Stadiums Poker Tour (ISPT) nearly had enough ambassadors to fill a 6-Max table, their marketing boss – Georges Djen – has announced that the event will require the participation of at least 15,000 players if the €20 million unguaranteed tournament is to proceed.

Speaking to pokerstrategy.com, Djen announced that a schedule of side events was to be announced which would attract players to Wembley to complete in both online and on-the-field tournaments. Djen also said that poker tables could be set up in Wembley´s VIP lounges if the weather turned unpleasant.

However, this new “condition” for the ISPT taking place practically puts the final nail in the coffin for an event which has been two years in the planning. With the ISPT Wembley likely to coincide with the first week of the World Series of Poker in Las Vegas, it was already unlikely that organisers would find the numbers to make Wembley a realistic venue (we actually suggested in July that Vale Park Sports Ground – home of Wembley FC – would make a more suitable alternative).

7,000 seats for the event have been given to Partouche to promote through online satellites – but they cannot guarantee the event taking place either. Partouche.fr, which has an average of 140 players on its site, has added a proviso in the small print on its web site that the seats will be awarded “if the event takes place”.

The ISPT ambassadors themselves are not convinced either. In a widely touted ISPT promotional video, Michael Mizrachi invites players to join him London for an event which will have “expected … at least … almost … thirty thousand players playing for 20 million dollars” (gone down again). Whether he will turn up himself if the ISPT Wembley clashes with the WSOP Player´s Championship is yet to be seen!

One Reply to “ISPT Need 15,000 Players for Event to Proceed”