The second event of the International Stadiums Poker Tour has been announced on the organiser´s Facebook page – and will be held in a casino in Tangiers. 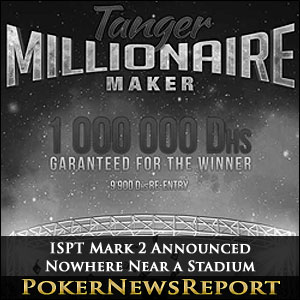 The second event of the International Stadiums Poker Tour has been announced on the organiser´s Facebook page – and will be held in a casino in Tangiers.

After all the speculation about ISPT2 taking place in the 02 Arena in Prague, the Maracana Stadium in Rio de Janeiro or the Berlin Olympic Stadium, the second International Stadium Poker Tour is to take place in the Casino de Tanger in Morocco.

Already being marketed as the “Millionaire Maker” (in Moroccan Dirhams, not in a currency that most people outside of North Africa would be familiar with), the event is to take place between Wednesday October 30th and Sunday November 3rd and clashes nicely with the Grand Prix de Paris, the Grosvenor UK Poker Tour in Blackpool and the UKIPT Main Event on the Isle of Man.

The winner of the tournament is “guaranteed” (according to poster appearing on the Casino website) 1,000,000 Dirhams (about $118,000), but please note that the goalposts were regularly moved at Wembley, so – with seven weeks until the event starts – everything could still change.

Those (few) people who would like to participate in the event may be disappointed to learn that no online satellites are planned to allow players to qualify for the event before arriving in Morocco. Speaking in an interview with Tobias Frey for the German PokerStrategy.de site, Prosper Masquelier said that wanted to focus on “classical satellites” rather than involve the online companies (that rescued the event last time).

Live re-buy and add-on satellites will be hosted in the Casino de Tanger in the few days prior to the start of ISPT2: The Millionaire Maker, but no other qualification routes have been announced to date and, due to the size of the Casino de Tanger, it will be unlikely that a side event schedule will accompany the Main Event (although cash tables can be opened on request).

Probably not. By keeping the Tangiers event relatively anonymous – and by avoiding the ridiculous press conferences that preceded the inaugural ISPT – Masquelier has ensured that he cannot be accused of cocking up on the grand scale that he did before Wembley.

However, by scheduling ISPT2: Millionaire Maker alongside the Grand Prix de Paris, the UKIPT and the GukPT – not having any satellite qualifiers in place and by launching the event on Facebook – it is unlikely that anybody will notice!