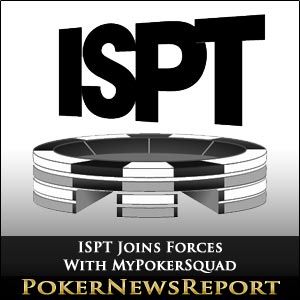 About six months remain before the ISPT kicks off its inaugural event on May 31, 2013, and the Tapie-led endeavor is holding nothing back in aiming for its goal of 30,000 players to compete in the first ever online/live tournament. With Sam Trickett, David Benyamine, Patrik Antonius, Michael Mizrachi and Liz Lieu already signed on as ambassadors for the event, the addition of the more than 120 players that make up MyPokerSquad adds a new dimension to the tourney.

MyPokerSquad offers new opportunities for pro players, extending its staking system worldwide, Benyamine stated on the ISPT website. This is a new way for all players to take part in ISPT. I am pleased to bring my experience to this project.

Poker players who won’t be able to make it to London’s Wembley Stadium for the tournament can still get in on the action by staking a part of the buy-in of €600 for each MyPokerSquad player and each ISPT ambassador, the ISPT website states. The tourney also permits one rebuy and two add-ons with an expected prize pool of €20 million. The event will begin with all entrants playing via laptop throughout the stadium. When the final 10% of players are left standing, instructions will be given to log out of their computers and transition to the field for the conclusion of the tournament in a live format.

MyPokerSquad has established a reputation in France and Belgium over the past three years. The staking platform has plans to expand to the United Kingdom and Germany prior to 2013.

The ISPT will run for seven days from May 31 through June 6. The WSOP recently announced its dates for 2013 that will begin on May 29 and end with nine players of the Main Event still remaining on July 16 at the Rio All-Suite Hotel & Casino in Las Vegas. Pros who normally schedule their summer to partake in the entire running of the WSOP will certainly be in a quandary trying to decide if the ISPT will be worth postponing their WSOP schedules. Many still are not convinced that the ISPT will live up to its billing and attract anywhere near 30,000 players.