The International Stadiums Poker Tour (ISPT) is picking up steam as more players sign on to participate in the Wembley Stadium debut. 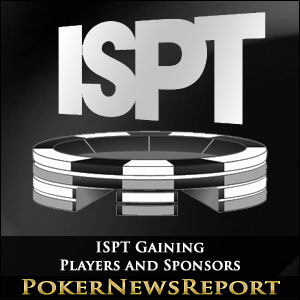 The International Stadiums Poker Tour (ISPT) is picking up steam as more players sign on to participate in the Wembley Stadium debut.

As of this writing, 177 players have gained entry to the Day Two live event via Day One competition either online or live at Dusk Till Dawn (DTD), or via direct buy-ins. The current prize pool stands at €477,900 and the average chip stack is 53,384. Barrie Price leads in chips with 183,800, followed by Adebavo Odetovinbo and Nicolas Cardyn with 170,274 and 136,593, respectively.

Day One’s can continued to be played online at DTD from May 26-31 for a €300 buy-in and live from May 25-27. Players can forego Day One altogether by buying in directly for Day Two at a fee of €3,000. That option will likely be chosen by ISPT ambassadors such as Patrik Antonius, Lucy Lieu and Sam Trickett.

The ISPT has gone through a number of changes since the event was first announced that included scrapping the idea of 30,000 players seated in Wembley Stadium playing on their laptops until the remaining 10% transitioned to a live format. Also gone is a €20,000,000 guaranteed prize pool, in favor of a Dusk Till Dawn guarantee of  €1,000,000 to the winner.

The repeated changes in plans had many questioning whether the event would even get off the ground. It now appears as though all systems are go as the ISPT continues adding to its list of sponsors. Joining forces with DTD was instrumental in giving the event credibility, as were the ambassador partnerships with the likes of Trickett, Michael “The Grinder” Mizrachi, and David Benyamine.

The latest sponsor to align itself with the ISPT is Red Bull. The Austrian-based energy drink is now the official drink of the ISPT, continuing its trend of supporting somewhat extreme sporting events.

It’s too early too tell if the ISPT will be successful in its inaugural season. But new sponsorship deals and with well-known players such as JP Kelly, Dave “Devilfish” Ulliot and Toby Lewis on board, the event’s credibility continues to increase.