The International Stadiums Poker Tour (ISPT) has been rapidly making progress and has signed Sam Trickett as a sponsor to the event. 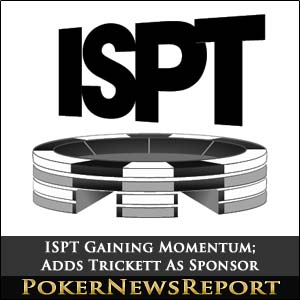 The International Stadiums Poker Tour (ISPT) has been rapidly making progress and has signed Sam Trickett as a sponsor to the event.

Many industry critics have denounced the ISPT’s plan to assemble 30,000 players at Wembley Stadium next May to compete in the world’s largest poker tournament first on laptops and then transitioning to a live format after 90% of the field is eliminated as a hare-brained scheme destined for failure. But the ISPT went a long way in silencing those critics by adding Sam Trickett as an official ambassador of the inaugural event.

Trickett is the biggest name in UK poker and has amassed $16.4 million in tournament winnings with the bulk of that coming from a second place ($10 million) finish in this summer’s $1 million buy-in Big One For One Drop. Trickett is also well-known for his prowess in high-stakes cash play.

I just want to announce that I will be an @ispt_poker official ambassador, Trickett tweeted. Will be one of the biggest tournaments ever held May 31, 2013.

The ISPT has been forging partnerships almost daily in its quest to make its annual tournament tour a success. Just a few days ago, a sponsorship deal with the Amateur Poker Association and Tour (APAT) was agreed upon, allowing players to play qualifying events at APAT’s online poker room on the International Poker Network. That agreement also calls for ISPT to market its tour at four live APAT tournaments, the first of which was last weekend’s European Championship of Amateur Poker in Nottingham.

APAT are happy to lend our support to the ISPT, said Des Duffy, APAT managing director. We created the UK’s first national poker tour and are excited that our members will have the opportunity to qualify for the UK’s largest ever poker event, online at APAT.com.

Trickett joins Michael Mizrachi as official ambassador for the ISPT on the heels of Wembley Stadium officials recently confirming that all systems are go for the tournament series that has a guaranteed prize pool of €20,000,000 and is scheduled to run from May 31-June 6, 2013. Over 2,700 players have already signed on to play in the first online/live poker event in tournament history. ISPT promoters now have roughly nine months to add more than 27,000 players to reach their goal. The addition of Trickett has perhaps given the tour a new aura of credibility.

As a poker player, I have to be associated with such an enormous event, Trickett said. Being part of this tournament means being part of the history of poker.

The ISPT was conceived by Bernard and Laurent Tapie, as well as Prosper Masquelier. The Tapie group was in negotiations with the U.S. Department of Justice (DoJ) earlier this year in an effort to acquire the assets of Full Tilt Poker, but the deal fell through over the DoJ’s insistence that non-U.S. players be paid in full within 90 days. As everyone is aware, PokerStars then stepped in to purchase the beleaguered poker room. Undaunted by the failed negotiations, the Tapie group is forging full steam ahead with the ISPT.

All the poker fans are welcome, from amateurs to professionals, Masquelier said.