Yesterday saw Team PokerStars Pro Viktor ‘Isildur1’ Blom against the first satellite qualifier in the SuperStar Showdown. When it was announced that Hungarian Attila “DodgyFish72” Gulcsik would be… 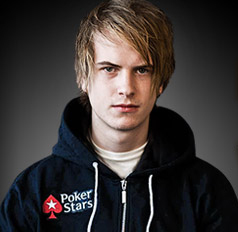 Yesterday saw Team PokerStars Pro Viktor ‘Isildur1’ Blom against the first satellite qualifier in the SuperStar Showdown. When it was announced that Hungarian Attila “DodgyFish72” Gulcsik would be challenging Isildur1 in a match everyone thought the challenger would be whitewashed (and at one point he almost was; down around $10k), however DodgyFish72 battled back and at the end of the match Isildur1 was ahead by just $10 (1 big blind in this match).

DodgyFish72 won the opportunity to face Isildur1 after winning an $11 satellite tournament and then a heads-up tournament, and was staked for $15,000 to face Isildur1. Unlike the usual SuperStar Showdown format of 2,500 hands of $50/$100, the stakes were lowered this week to $5/$10 with PokerStars offering a $15,000 bonus if either player managed to bust the other, and DodgyFish72 was allowed to keep any money he had left at the end of the 2,500 hands – which turned out to be $14,990!

When speaking to PokerStars before the match, DodgyFish72 had this to say:

“My main goal is to try and play well without making huge mistakes. It is obvious that I am a huge underdog as Viktor has significantly more experience being one of the best in the field of heads-up cash games.”

Being a qualifier facing one of the best heads-up online poker cash game players, everyone had written off DodgyFish72’s chances before a single hand had been played. It seemed everyone’s predictions that the match would end in a whitewash would prove true because at the mid-way point DodgyFish72 found himself down $10,768. However the Hungarian battled back and with a total of 1,000 hands remaining, DodgyFish72 had managed to claw his way back into the match finding himself just $2,000 behind Isildur1.

Then amazingly on the very final hand DodgyFish72 posted his $10 for the big blind and Isildur1 open-shoved for $3,745 to which DodgyFish72 folded. That $10 big blind ended up being all that seperated the pair with DodgyFish72 finishing the match with a stack of $14,990 which he got to keep, and after the 2,500 hands had been completed, Isildur1 acknowledged how well the qualifier played in the chat box: