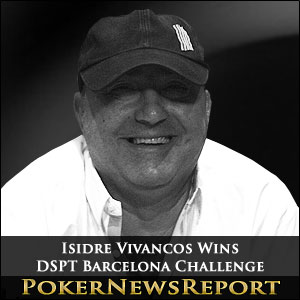 There was a fairly disappointing entry for the DSPT Main Event at the Casino Barcelona this weekend – the first time (and possibly the last time) that the Deepstacks Poker Tour has ventured across the Atlantic. Just thirty-three players entered or re-entered the €1,375 + €125 event, despite the opportunity to play against DSPT ambassadors Mike “The Mouth” Matusow, Michael “The Grinder” Mizrachi and Tristan “Cre8ive” Wade.

No Luck for DSPT Ambassadors

Because of the structure of the event (players started with 30,000 chips), twenty-one players remained in the tournament when the final day got under way at the Casino Barcelona yesterday – sadly without Michael Mizrachi, who had been bust late on Saturday night to a runner-runner gutshot straight – but with Mike Matusow and Tristan Wade still in competitive positions.

Wade was eventually to bust out in thirteenth place when his pocket Queens were bust by a player holding pocket Jacks but, as the final table of ten was set, Matusow was handily placed third in chips. Unfortunately for Matusow he was to finish just out of the money (only five players cashed in the event) when he was first crippled K♥ K♣ > 10♥ 10♣ and then crashed out of the event A♣ A♠ > 6♣ 7♣.

The heads-up conclusion for the DSPT Barcelona Challenge was set when Omar Sharif (the poker player, not the 81-year-old actor) went on the rampage and knocked out the fourth and third placed players – taking a substantial chip advantage into the heads up against Isidre Vivancos (who lives less than a hour´s drive from the casino).

A good battle developed for the next two-and-a-half hours; during which time Vivancos clawed his way back into contention, and eventually took down the tournament for €19,000, the DSPT Barcelona trophy and a seat in the $500,000 guaranteed DSPT Mohegan Sun World Championship in Connecticut from November 18th to 25th.

Two more series of Deepstack Challenges are scheduled before the World Championship in November. The Chinook Winds Resort Casino will host the DSPT Oregon State Poker Championships from October 27th to November 4th with the $1,100 buy-in Main Event having a $150,000 guaranteed prize pool, just before Matusow, Mizrachi and Wade travel down to Panama for the DSPT Veneto Poker Carnivale from November 6th to November 11th in which the $1,250 buy-in Main Event will have a $200,000 guaranteed prize pool.