LA pro Issac Hagerling bad beats his way to a win in Event #27. 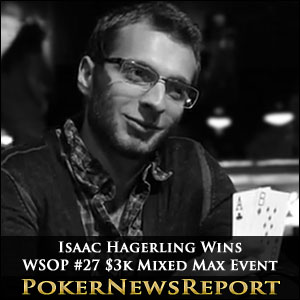 LA pro Issac Hagerling bad beats his way to a win in Event #27.

In one of the feel good stories of the summer, straight-laced poker pro Isaac Hagerling celebrated his 26th birthday by making his first final table and winning his first WSOP bracelet. Hagerling, who had never won more than 70k in a single tournament before, took down over $372k for his efforts in the second Mixed Max event in WSOP history.

The event, which began with 593 hopefuls, featured 9-handed play on Day 1 and 6-handed play on Day 2. After reaching the final 32, players were then seeded by chip counts. On Day 3, the remaining entrants played in a single elimination head-ups tournament. Play continued until only Hagerling remained.

The Day 3 field was chock-full of bracelet winners and feared pros. In order to get to the finals Hagerling has to traverse through the likes of Nick Binger, WPT Championship Winner Yevgeniy Timoshenko and 2012 October-Niner Jeremy Ausmus. Runner-up Max Steinberg faced similar resistance, as he was tasked with defeating number 1 see Brandon Cantu, and seasoned pro Jason Koon.

Steinberg, who won a bracelet just last year, would prove more than a formidable opponent for the comparatively inexperienced Hagerling. Both players started with relatively the same amount of chips, but it was Steinberg’s selectively aggressive style that would win him pot after pot. Showing little fear, Steinberg proved that he was not afraid to stack off with air, and on one occasion showed Hagerling a busted draw after the latter folded to a shove.

But throughout it all, Hagerling was brilliant. He rarely made a crucial mistake and after Steinberg changed gears, he adapted accordingly. If anything, young Isaac sometimes wouldn’t give Steinberg credit for having a big hand. His disbelief would almost cost him the tournament on what would prove the hand of the summer.

Hagerling raised to 65k with K-T and Steinberg three-bet to 175k with A-K. Hagerling called. The flop came out 7-3-K rainbow. With absolutely no draws on board, both players were confident in their top pair. Steinberg led out for 215k, and was called by Hagerling, who appeared to be in pot control mode. But when the turn came a blank, Steinberg deceptively checked, leading Hagerling to believe his hand was good. He then fired out a huge 525k shell, only to be shocked when Steinberg check-raised all-in for 2.2 million.

Steinberg clearly took advantage of Hagerling’s perception of him. In Hagerling’s mind, Steinberg was capable of making this move with combo-draws, flush draws and possibly air. This line of reasoning ultimately led him to call Steinberg’s all-in. All Steinberg needed to do was fade three-outs, but there was no beating the birthday boy, as a Ten hit the river. Railbirds and participants alike were left in a state of bewilderment.

Although Steinberg was left crippled, he fought back valiantly. In fact, it took Hagerling 34 more hands to finally finish off the heart-broken, yet surprisingly poised pro.

Event 27 was truly a memorable match, featuring some of the best play we’ve seen thus far at this year’s WSOP. But if there is one lesson to be learned it’s that you should never play heads-up against someone who is celebrating his birthday.