Is This the End for the WSOP November Nine?

Reports coming out from Las Vegas suggest that 2011 will be the last year in which the “November Nine” WSOP Main Event Final Table will be isolated from the summer jamboree that is the World Series of Poker. 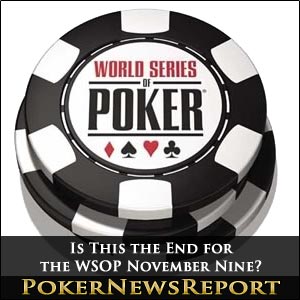 Reports coming out from Las Vegas suggest that 2011 will be the last year in which the “November Nine” WSOP Main Event Final Table will be isolated from the summer jamboree that is the World Series of Poker.

What started in 2008 to give players time “mentally and physically relax” after a gruelling eight days of competition has provided nothing of the sort – with the majority of the final table participants having spent the past three months touring Europe and seeking fortunes elsewhere.

The original scheduling of the climax for the WSOP November Nine also suited the TV coverage of the event, with the final table coinciding with the conclusion of ESPN´s once a week television poker broadcasts. Following Black Friday, and the volume of advertising revenue that ESPN lost due to the forced withdrawal from the American online poker market of PokerStars and Full Tilt Poker, it is not even certain that ESPN will be able to provide coverage of the 2012 World Series of Poker, and this will certainly influence any future plans for the climax of the tournament.

The Player´s Sponsorships Have Suffered Too

The three month gap also used to provide players with time to organise lucrative sponsorship packages with the “Big 2” – keen to see their patches emblazoned across the chests of the victors. This year, 888 Poker were quick to sign up Sam Holden and Anton Makiievskyi, while Paddy Power Poker adopted Eoghan O´Dea – even before pen went to paper! PokerStars seem to have got it right again (after sponsoring Jonathon Duhamel last year) by sponsoring Pius Heinz, but the German (who could actually do with being sponsored by “Clearasil”) was not seen wearing a sponsorship patch during Sunday´s proceedings. Of the other two finalists, Ben Lamb seems to be sticking to his Aria Casino T-shirt and “PLO QuickPro” shoulder badge, while Martin Staszko appears to have no sponsorship package in place at all!

Perhaps during the hustle and bustle of the WSOP Main Event Final Table proceedings and the “enshrinement” (that is it´s official name) of Barry Greenstein and Linda Johnson into the Poker Hall of Fame, this might be the wrong time to announce a change. However, Seth Palansky – the Communications Director of the WSOP – has already commented that the concept has lost some its value by being copied by such events as the Partouche Poker Tour – which has its own November Nine this coming weekend in Cannes – and the Boyle Poker International Poker Open, which has it´s “November Eight” final table in Dublin on November 26th.

Fancy a Bet on the Outcome?

A number of bookmakers are offering revised prices on the November Three – with none of them being particularly generous about any of the players. Pius Heinz is a best priced 10/11 with Boyle Sports, but generally 4/5 elsewhere. Most companies offering betting on the outcome of the WSOP Main Event have Ben Lamb priced at 2/1, while Paddy Power and 888 Sport go best-priced 7/2 about Martin Staszko – obviously trying to get back some of the money the companies spent sponsoring Holden, Makiievskyi and O´Dea. Several bookmakers will also be betting in running during Tuesday´s conclusion, so please remember that ESPN´s “almost live” coverage has a 15 minute delay before you ring up William Hill to get a bet on a player that has just busted out.