Is the Rollback of Net Neutrality being Over-Hyped?

Whereas advocates of a free Internet believe the rollback of net neutrality is a bad thing, it could have positive implications for online poker players. 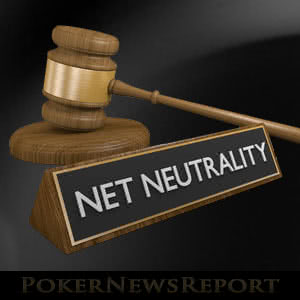 Whereas advocates of a free Internet believe the rollback of net neutrality is a bad thing, it could have positive implications for online poker players.

On December 14th, members of the Federal Communications Commission (FCC) will vote on a deregulation plan to rollback the current net neutrality rules put in place by the Obama administration. Chairman of the FCC – Ajit Pai – is of the opinion that the current rules discourage telecommunications companies from upgrading their networks and investing in infrastructure.

Advocates of a free Internet oppose the plan. They say it will give Internet Service Providers (ISPs) the freedom to charge consumers extra for “fast lane” Internet speeds and – with regard to Internet gaming – could result in online gambling websites having to pay premiums to ISPs in order for their websites to operate at a functional speed. But are these arguments valid?

Certainly if you agree with the views of political satirist John Oliver (watch the videos here and here), the sky is about to fall. However, the rollback of net neutrality could have positive implications for the iGaming industry and – more importantly – for online poker players currently experiencing frequent disconnects and losing their money to bot farms.

What is Net Neutrality?

Net neutrality is the principal that ISPs treat all Internet data the same. In theory, companies such as Verizon and Comcast are not allowed to charge different amounts for the content they deliver, and cannot block websites or slow Internet speeds based on their content. The following video – published by an advocate of a free Internet – is the best explanation of how the principal works.

However, in practice, that is not how the Internet works these days. Whereas ten years ago, Internet traffic was broadly distributed across thousands of companies, today fewer than thirty “web giants” (i.e. Netflix, BitTorrent, Facebook, Amazon, etc.) are responsible for more than half of Internet traffic. In 2015, Netflix alone accounted for 36% of all downstream Internet traffic in North America.

In order to avoid latency in the delivery of data to consumers, many web giants use Content Delivery Networks to optimize content delivery. This often involves setting up their own servers or routers inside data centers used by ISPs to move traffic from their data centers to consumers directly and bypass the “pipe network” illustrated in the above video.

It exists, but not in the way many people believe. The problem with the arguments being put forward by advocates of a free Internet is they are flawed. Take for example the argument people won´t be able to start their own online businesses because their websites will not load as quickly as the websites of competitors who have paid for their websites to be in the “fast lane”. That´s already happening.

The argument that consumers will have to pay more to access certain genres of content is likely no more than speculative. There is already healthy competition between ISPs (despite what conspiracy theorists claim) and, due to the option of being able to monetize certain services, there will likely be an increase in competition as new providers (possibly Amazon and Google) enter the market.

Furthermore, the rollback of net neutrality will prevent the introduction of individual state legislation intended to impose state-specific privacy requirements on ISPs. Nearly thirty states introduced online privacy proposals following the repeal of federal online privacy rules last March – rules that would have increased compliance costs for ISPs and that would have no doubt been passed onto consumers.

Also, even if online poker players have to pay a small premium to access gambling websites, better infrastructure will surely enhance their playing experience. Frequently players complain about websites lagging and disconnection problems, and with better networks in place providing a more reliable service, these problems should be mitigated – if not eliminated altogether.

Finally, if a premium charge is introduced to access online gambling websites, this will affect the profitability of bot farms more than individual players. Bots have been a problem in online poker for more than a decade and, despite attempts to rid poker websites of them, bots continue to drain the poker ecology of funds. If playing at an online poker site is no longer cost-effective for bot owners, they will likely redirect their attentions elsewhere, leaving online poker players to enjoy a cleaner and more profitable online poker experience. And where´s the harm in that?

Instead of fearing the rollback of net neutrality, maybe online poker players should be welcoming it.

One Reply to “Is the Rollback of Net Neutrality being Over-Hyped?”