Is the Future Bright After ‘New Full Tilt Limited’ is Set Up in Ireland?

French investment firm Groupe Bernard Tapie (GBT) appear to be moving ever closer to a relaunch of beleaguered website Full Tilt Poker – if records acquired by company information provider SoloCheck.ie are any indication. 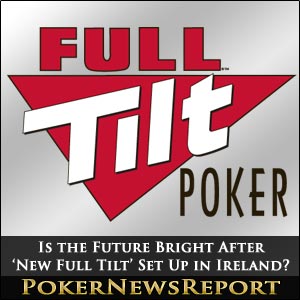 French investment firm Groupe Bernard Tapie (GBT) appear to be moving ever closer to a relaunch of beleaguered website Full Tilt Poker – if records acquired by company information provider SoloCheck.ie are any indication.

SoloCheck.ie – who provide information related to reports, credit ratings, audited accounts and director reports on Irish and British companies through a search facility – state that a “software consultancy and supply” firm named ‘New Full Tilt Limited’ was set up on February 14 this year “with a Dublin registered address” and starting capital of €1 million.

Adding more credibility to the prospect of a Full Tilt relaunch is the fact two firms, named ‘New Full Tilt Limited’ and ‘Full Tilt Holding Limited’, have just recently been registered as companies in Malta.

While few of Full Tilt’s frustrated customers will feel any love for the poker room – even if this ‘New Full Tilt’ company was incorporated in Ireland on St Valentine’s Day – it can surely only be good news in their quest to gain access to their accounts with the inactive website after it was shut down by the US Department of Justice (DoJ) way back on Black Friday last April 15.

It is claimed that as much as $440 million is still owed to Full Tilt players around the world following its closure in relation to allegations of money laundering, bank fraud and illegal gambling, so maybe there is light at the end of the tunnel for those still hoping to receive at least some of their cash back after more than a year of being thwarted at every turn. Let’s keep out fingers crossed.

With the Alderney Gambling Control Commission (AGCC) having last week announced specifics regarding a public hearing into the new licence application made by Full Tilt Poker company Orinic Limited and recent reports that Dublin-based Pocket Kings Limited – Full Tilt’s marketing and technology division – have placed adverts for jobs on Irish employment website jobs.ie, it does appear that GBT are well on the way to rescuing this once-loved poker room.

While the ISPT website names Masquelier – who was involved with the Partouche Group from 2006 until 2009 and even achieved the status of head of Partouche Interactive before helping to create the ISPT in 2010 – as the “founder of the first French TV broadcast dedicated to poker”, his inclusion might be a worry for some Full Tilt customers.

Why? Well, many commentators and poker fans believe ISPT – which is supposedly being launched in September at London’s Wembley Stadium with an ever-changing guaranteed prize pool that is now stated as being €20 million – to be something of a non-starter after so little information has been provided since first being announced last October.

Connections and reliability will always cause some speculation, so Masquelier’s involvement won’t go unnoticed by Full Tilt’s angry clients.

However, as stated above, this latest piece of news surrounding Full Tilt’s potential rise from the ashes makes for interesting conjecture – particularly after Pocket Kings placed 13 adverts on the employment website that stated they are hiring and have “an urgent requirement for experienced multilingual customer service representatives. With an attractive salary, these 2-3 month contract roles may become permanent and offer an exciting opportunity to join a vibrant and energetic company”.

Additionally, with the AGCC revealing that directors of Full Tilt subsidiary Orinic will attend a public hearing into their Category 2 online gaming licence application – which will allow for the handling of gaming funds, if awarded – a week on Thursday in Alderney, things do appear to be finally heading in the right direction, as far as customers of the poker room are concerned.

As always, Poker News Report will provide you with all latest news on GBT’s possible purchase of Full Tilt and any new developments on Orinic’s licence application, so don’t forget to bookmark our website for ease of return.