The Paddy Power Poker sponsored Irish Winter Festival will return to Dublin for the four-day festival with the €1,000+€125 buy-in Irish Masters as the main event. 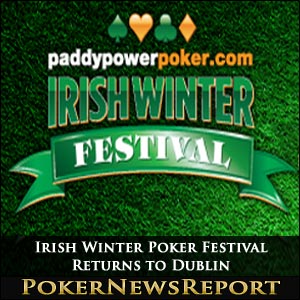 The Paddy Power Poker-sponsored Irish Winter Festival (IWF) will return to Dublin’s Burlington Hotel for a third successive year this October for the four-day festival that will present the €1,000+€125 buy-in No-Limit Hold’em Irish Masters as the main event.

Of course, there will also be numerous side events taking place during the October 26 to 29 festival, which was first staged back in 2001 at the famous Merrion Club in Ireland’s capital city, although organisers have still to announce the full schedule for this year.

However, news should be forthcoming very soon – and Poker News Report (PNR) will make sure to provide all the details once revealed.

Traditionally staged on the October Bank Holiday weekend, the main event runs from the 27th to the 29th – and every one of the hundreds of entrants will be aiming to emulate John Keown’s success from 2011 when the Northern Irishman pocketed $141,703 after outlasting 394 other competitors for his victory.

OK, Niall Smyth might not be a household name, but most poker fanatics should know that the youngster enjoyed an incredible route to glory for his Irish Open victory last year – also at the Burlington Hotel.

However, just in case you don’t know or can’t remember, he turned a €10 each-way bet on horse racing’s Grand National winner Ballabriggs into €195, before then using all that cash – and a bit more – to enter and win a €220 online satellite that provided him with a €3,400 main event seat, as well as the chance to win Paddy Power’s Sole Survivor competition as the last internet qualifier left in the event.

Of course, Smyth did just that – ensuring that he became the first ever Sole Survivor to bag the lucrative sponsorship deal worth €100,000 as well as actually win the Irish Open main event crown. That’s all pretty astonishing stuff, but it does show that unknowns can grab riches, as well as publicity and sponsorship, almost beyond belief through poker success.

Back with the Irish Winter Festival, it has also become famous for its unusual side events, hosting tournaments such as Win The Button, Mythical, and Blinds Man’s Bluff, among others, while also ensuring that entrants – and their friends and families – can stay competitive during the evening with games provided in the venue’s bar, including Flip for a Drink, Revolving Darts (although we might not recommend this!) and Beer Pong.

Some of the world’s most famous poker stars have recorded impressive Irish Winter Festival victories in previous years, too – and in particular at the Irish Masters, including Triple Crown winner Roland De Wolfe in 2006 and Hendon Mobster Ram ‘Crazy Horse’ Vaswani in 2004. De Wolfe pocketed $696,970 for his success, while fellow Londoner Vaswani earned $117,003 with his triumph.