As the first week of the UKIPT Galway draws to a close, Irish poker players have made a clean sweep of the events so far – with a little help from a Dane! 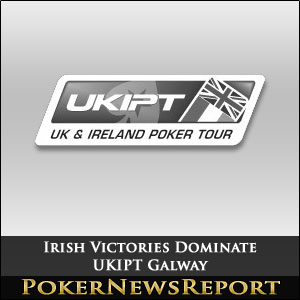 As the first week of the UKIPT Galway draws to a close, Irish poker players have made a clean sweep of the events so far – with a little help from a Dane!

Twenty-one of the sixty events scheduled for the Full Tilt Poker sponsored UKIPT Galway have been concluded so far, with Gus Hansen´s victory for Ireland in the €1,100 buy-in Ireland -v- UK Heads-Up Championship (Event #8) being the highlight of the week to date.

Hansen – who was originally playing for the UK team, but switched allegiances before the semi-finals – collected €16,151 for his victory against Dave Nicholson (€10,767), with joint third place finishers Max Silver and Kevin Williams each picking up €4,486.

Diarmaid Kennedy was the first big winner of the week when he took down the Galway Cup (Event #1) for €12,388 after a six-hour final table and a cautious heads-up climax against Breandan Reaney, and the most popular winner of events played so far was undoubtedly Mary Keary Athenry, who won the “25” World Championship (Event #3).

Among the other names to have made an impact this week are 888Poker´s Padraig Parkinson – winner of the €110 Pot Limit Omaha Triple Chance Event #18 – and Patrick Bermingham, who came closest to losing to an Englishman, when defeating Karl John Paul Snow in Event #15 for a €2,245 first prize, a UKIPT Trophy and a FTOPS Main Event entry.

Spare a Thought for the Lithuanians

As much as it may seem that the UKIPT Galway is a contest between Ireland and the UK which the Irish are running away with, there are players from many other countries who have made the trip over to the Emerald Isle.

Players from Lithuania have final tabled three events so far and finished runner-up in two of them, while Brazilian Enrique Rocha Andre collected two cashes in the same night – finishing third in the €50.00 buy-in Pool Doubles Tournament (Event #14) before jumping into the €55.00 buy-in Turbo Deepstack (Event #16) and finishing third again!

Big Week ahead for UKIPT Galway

This weekend, the UKIPT Galway will be dominated by the €150.00 buy-in “Accumulator” Event and the Irish Bridge Masters, but on Monday the really serious poker events get going once again – Monday seeing the first day of the €2,500 buy-in Irish Poker Championships and the start of the Super Satellites into Thursday´s €1 million guaranteed UKIPT Galway Main Event.