Long-awaited changes to gambling legislation in Ireland got the green light yesterday and the new rules will come into force on 1st August 2015. 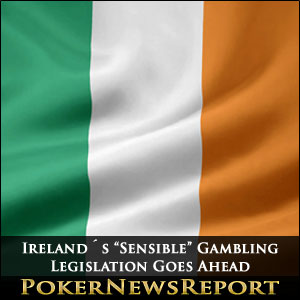 Long-awaited changes to gambling legislation in Ireland got the green light yesterday and the new rules will come into force on 1st August 2015.

The Betting (Amendment) Act 2015 supersedes much of Ireland´s existing gambling legislation which dates back to 1931 (“The Betting Act”) and 1956 (“The Gaming and Lotteries Act”). It is intended to regulate the entire gambling industry in Ireland and create a balance between tradition brick and mortar establishments and operators that offer an online service.

The new legislation acknowledges that a significant proportion of gambling transactions is conducted online and requires any operator that provides a service to Irish gamblers to obtain a license and pay a 1% betting duty (betting exchanges must pay 15% betting duty on the commission they receive from exchange transactions).

The government expects to raise €25 million from the cost of the licenses and the betting duty (which is already being paid by Irish High Street bookmakers) and will use some of the money to support the country´s horseracing industry and establish a social responsibility fund to tackle problem gambling in Ireland.

A Sensible Solution to a Difficult Problem

The Betting (Amendment) Act 2015 has been welcomed by most players in the industry as a sensible solution to a difficult problem. For many years, brick and mortar establishments have complained that they are being unfairly treated, while the growth of online gambling raised concerns from the horseracing industry.

The need for licensing and the payment of betting duty will not hurt online operators, and the government is fast-tracking license applications made by companies that already hold an operating license in other regulated jurisdictions to prevent unnecessary delays (imagine if that foresight had been applied in New Jersey re PokerStars!).

Stiff penalties are also being introduced for individuals and companies that fail to comply with the new legislation. Fines of up to €300,000 ($320,000) will be imposed on repeat offenders to protect the regulated industry, irrespective of whether the unlicensed operator is physically situated in Ireland or providing a service from an offshore location.

How Does the New Legislation Affect Poker Players?

Under the new legislation, gambling operators are not allowed to pass the additional costs they will incur onto players, so there will be no repeat of the scenarios in Europe´s ring-fenced jurisdictions where poker players have suffered through higher rake/tournament entry fees and the reduction of player benefits.

One area which has not yet been resolved is the limitation of poker tables in brick and mortar casinos. The yet-to-be-enacted Gambling Control Bill 2013 proposed that casinos would be limited to just fifteen table games. This would have serious implications on events such as the Irish Open, and it waits to be seen whether special events such as the Irish Open would be allowed an exemption.

The Betting Amendment Bill is just a first step in providing for a well regulated betting and gambling regime. This Bill will allow for the regulation of those providing betting services by remote means to persons within the jurisdiction for the first time. This is a major step in the right direction.  The implementation of the regulatory regime for remote operators will also allow for the extension of betting duty to these companies.