Iqbal Ahmed is in the driving seat to pick up the £210,400 top prize for the PokerStars UKIPT Nottingham main event at the after dominating the weekend action. 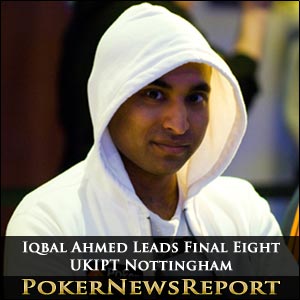 Young English player Iqbal Ahmed is in the driving seat to pick up the £210,400 top prize for taking down the PokerStars UK and Ireland Poker Tour (UKIPT) Nottingham main event at the famous Dusk Till Dawn venue after dominating the weekend action.

Iqbal Ahmed – whose biggest cash arrived back in late May of last year when he collected $67,812 for his runner-up spot in the €910 buy-in No-Limit Hold’em main event of the Estrellas Poker Tour Alicante – took over as chip leader early on Day 2 of the £700+£70 buy-in main event in the East Midlands and has pretty well stayed there since.

In fact, when the chips were bagged up ahead of today’s eight-handed final table, PokerStars player Ahmed held 6,680,000 – almost three million ahead of his nearest challenger, Ian Senior (3,765,000) – making the former an overwhelming favourite to record the biggest score of his career.

While Ahmed has a huge chip lead after the conclusion of Day 3, it is far from certain that he will win the title, with Senior – who had been grinding away among the lower reaches of the survivors on Saturday before surging from 167,000 to 3,765,000 yesterday – ready to battle his way to the title.

Dusk Till Dawn regular Robert Baguley might be down in seventh place right now, but he also made a big move yesterday to end Day 3 with 2,115,000 – and even cracked the pocket kings of the experienced Chris Brammer with just J♥ 3♦.

Under the gun, Brammer opened and was called by big blind Baguley. The flop came 3♣ 5♠ Q♠ and there was a small bet and call before the J♦ arrived on the turn.

Baguley then moved all-in for 881,000 and Brammer called – only to see his kings beaten by the two pair of the former.

That monster pot left Day 1c chip leader Brammer with just 370,000 chips and he was hitting the rail about three hours later in 11th place for £11,350.

Meanwhile, eighth placed Irishman Barry McMahon – with 1,750,000 chips – will be aiming to emulate fellow County Tyrone player Emmett Mullin, who took down the UKIPT Galway €770 buy-in main event for $131,574 back in February.

Incredibly, McMahon and Mullin – who was eliminated in 204th place here for £1,240 – are best friends and hail from Omagh, so there is a possibility we’ll see back-to-back successes from the Northern Irish county town.

Pirie looked like he was going to be the short stack for the final day in Nottingham, but recorded the last knockout of Day 3 when overcoming Dutch PokerStars player Devron Hasslenook right before the chips were bagged up last night.

Pirie had been quiet for most of the day until calling an all-in move from short stack Hasslenook. The Dutchman had been at risk of elimination for quite some time, making several all-in moves before meeting his demise at the hands of the Englishman.

In early position, Hasslenook shoved for 835,000 with only big blind Pirie adding the 775,000 to call, even though that chunk was over half his stack.

Day 2 also saw some well-known faces exit without cashing as 346 survivors were cut down to just 76, with the likes of Team PokerStars Pros Liv Boeree and Jude Ainsworth, as well as Nik Persaud and Ian Frazer, crashing out.