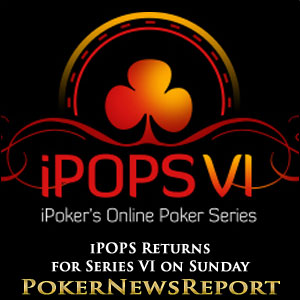 Players on the iPoker network will be counting the days down to Sunday when iPOPS VI gets underway with the first of eight “low” buy-in tournaments. One iPOPS tournament is played every night from Sunday onwards, with the €40.00 buy-in “mini Main Event” concluding the Low Event Schedule on Sunday April 20th.

The Series then takes a break until Sunday 4th May, when the first of eight high buy-in events is scheduled, and again one event takes place every night until the Series reaching its climax on Sunday 11th May with a €100.00 buy-in Main Event which has a guaranteed prize pool of €300,000.

Remember Prague? And Barcelona? And Dollars?

The iPOPS Series have come a long way since the first four-event series was launched in November 2011, and in which the final 27 players in the Main Event were whisked away to Prague to finish the game in the Ambassador Casino. Sweden’s Tomas Mitell took home $90,550 in that inaugural event, while Jesse Rockowitz picked up $100,000 for winning the IPOPS II Main Event the following June in Barcelona.

The introduction of a low buy-in schedule last year gave players the opportunity to compete in the iPOPS Series without busting their bankrolls, but possibly the biggest change came when the currency of the tournaments was changed from US Dollars to €uros – immediately increasing the value of the guaranteed prize money on offer by 33%.

Will There be Opportunities for Overlays?

That particular change (from US Dollars to €uros) also significantly increased the value of any tournament overlays and, looking at some of the events in both schedules, there are plenty of potential events which will be under-subscribed and offer additional value to those who cash in them – the Super Tuesday iPOPS 3H €50,000 guaranteed being an obvious candidate, as the regular Super Tuesday prize pool rarely exceeds €35,000.

Looking at the next week´s low event schedule, tournaments which could potentially offer overlays include iPOPS 3L “mini Super Tuesday” and iPOPS 6L “Top Gear Friday” – which needs 165 players to reach its guarantee and is being played on Good Friday. It is worth noting that most events have a two hour late registration period (re-buy events – one hour), with many having multiple entry options which allow each player to enter a tournament up to four times and have their surviving chip stacks combined when the field reduces in size.