The top poker network has undergone a variety of changes since last year and its latest offerings will include new mobile options and an enhanced VIP format. 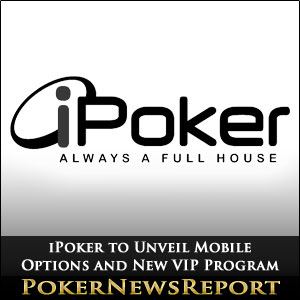 The top poker network has undergone a variety of changes since last year and its latest offerings will include new mobile options and an enhanced VIP format.

To be launched within weeks, iPoker will offer HTML5 and iOS apps on certain skins. Although the sites that will be first to offer the availability of [geolink href=”https://www.pokernewsreport.com/mobile-poker-sites”]mobile online poker[/geolink] have not been revealed, Playtech has confirmed the roll out will commence this spring on its dot.com and dot.fr websites. Players on iPoker’s Italy-facing site can also expect mobile offerings at a somewhat later date, eGR reported.

Also in the works at the iPoker Network is a revised player loyalty program. The new VIP format will permit skins to customize a tiered system designed to bring abundant rewards to its upper echelon players. The elite program will run in tandem with the current VIP rewards system and will include a new progress-tracking availability. Also, grinders will be given yearly goals to shoot for, as is currently popular at PokerStars.

The latest announcement follows last week’s revelation that iPoker has rolled out anonymous tables on the network. That concept was first introduced by Bodog Poker in 2012. After initially being scorned by many in the online poker industry, anonymous tables have proven to be a successful way to level the playing field and bring about a healthy poker room ecology. It balances player numbers among various skill levels and attracts recreational players who cannot be hunted and taken advantage of by more experienced players.

Last year also saw iPoker introduce a two-tier system among its poker skins that, like Bodog Poker, was implemented to create a better balance on the virtual felt. The result has allowed the iPoker Network to move into second place in cash game player traffic.

iPoker is apparently aiming to remain in second place, hoping to outdistance itself from PartyPoker and Full Tilt with its newest changes that include the launching of mobile offerings, a revamped VIP format, and new tournament options.