Sit n Go players on the iPoker Network will now be able to experience greater variance in their profitability with the launch of the network´s “Twister Poker”. 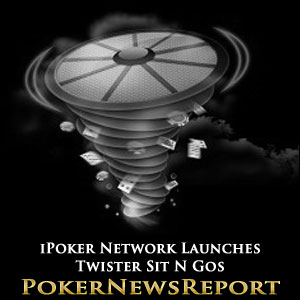 Sit n Go players on the iPoker Network will now be able to experience greater variance in their profitability with the launch of the network´s “Twister Poker”.

Twister Poker is iPoker´s version of the popular “Expresso” hyper-turbo games that were launched on Winamax Poker last year; in which three players compete in a winner-takes-all Sit n Go poker game with the prize value randomly selected as the players take their seats.

There are nine potential prize pools that could be selected:

Players can select to play up to six different Twister Poker tables at the same time to increase their chances of landing in a big game with a valuable prize – although they will still have to beat the other two players to collect the prize!

According to the PokerNewsReport calculator, the average prize value in a game of Twister Poker is $2.79 (@ $1.00 buy-in), meaning that players will be paying 7% rake – comparable to the existing “Turbo” Sit n Go games on the iPoker Network (4 minute levels).

However, in three-out-of-four games, players will be competing for just double their buy-in – a negative EV proposition for nearly all players; although this did not stop players on Winamax flocking to their “Expresso” version of the game last year, when the volume of cash game traffic dropped 20% because players became addicted to it.

Twister Poker is currently only available on Everest Poker, BetFred Poker and Poker 770, but is to be rolled out to other skins on the iPoker Network over the next couple of weeks.