Three Iowa Senators have proposed a bill calling for lawmakers to take another look at legalizing intrastate online poker in the Hawkeye State. 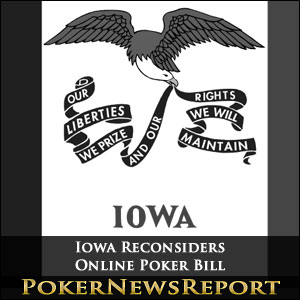 Three Iowa Senators have proposed a bill calling for lawmakers to take another look at legalizing intrastate online poker in the Hawkeye State.

Study Bills are introduced by Iowa legislators in an effort to determine how strongly the measure may be considered by the House of Representatives and the Senate. Such proposals typically are passed on to a committee after receiving sponsorship. If a committee finds favor with the bill, it may proceed to either chamber of the Iowa General Assembly for consideration and debate.

In March of last year, the Iowa Senate approved Senate File 2257 by a 29-20 vote, which would have permitted the state’s brick and mortar casinos to operate online poker sites. Some Iowa lawmakers were astonished that the measure was favorably voted upon in a debate that lasted roughly only ten minutes and saw no legislator speak out against it. However, after the Democratic-controlled Senate passed the bill over to the Republican-heavy House of Representatives, the bill died without so much as a count of ayes and nays.

Those Senators voting in favor of the online poker bill may have been influenced by a survey conducted by U.S. Digital Gaming that found that 150,000 Iowans play online poker. However, that study was done prior to Black Friday in April, 2011, when the U.S. DoJ prevented the top three online poker sites from catering to American players.

Senate Study Bill 1068 looks at both the security and integrity requirements of online gambling and the technology needed to properly regulate the industry under an intrastate format.

Nevada is preparing to go online with the country’s first legal online poker sites later this year. The Silver State’s existing statute is also confined to intrastate poker. But an amendment to include compacts with other states to increase player liquidity is being considered by Nevada lawmakers. If Iowa should be successful with its latest proposal, perhaps they too will eventually amend their laws to include interstate agreements.