An Iowa Senate subcommittee gave its approval to an online poker bill Thursday, sending the proposal to another committee for consideration. 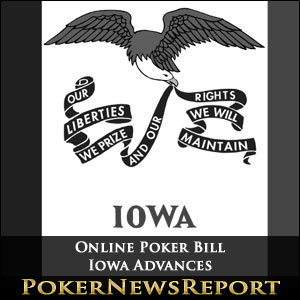 An Iowa Senate subcommittee gave its approval to an online poker bill Thursday, sending the proposal to another committee for consideration.

Senate Study Bill 1068 now advances to the Iowa Senate State Government Committee, with expectations that the proposal will be approved next week and then head to the Senate. Legislators in Iowa develop study bills to evaluate how the measure will be received by their fellow lawmakers before formally introducing the bill in the legislature.

The proposal may be viewed favorably in the Democratic majority Senate. However, passage in the Republican-controlled House is another matter entirely, as an identical bill died there last year.

Sen. Jeff Danielson (D-Cedar Falls), the bill’s sponsor, sees the legislation as a way to protect the thousands of Iowans who admit to playing poker online. Those players currently log on at unregulated offshore sites in which their funds are not protected. Danielson is seeking safeguards to be put in place by the Iowa Racing and Gaming Commission. That commission found that between $3 million and $13 million could be added to state coffers each year by legalizing online poker.

Opponents of the bill, such as Sen. Randy Feenstra (R-Hull), believe the proliferation of gambling creates more problems that contribute to society’s degradation, the Des Moines Register reported. That same newspaper conducted a poll that found almost 75% of adult Iowa residents are opposed to the legalization of online gambling.

But with New Jersey recently joining Nevada and Delaware in passing online gambling legislation, and other states such as Hawaii, California and  Pennsylvania considering proposals of their own, perhaps Iowa Republican lawmakers will take a closer look at getting in on the game during this legislative session.

The Iowa Gaming Association has spoken out in favor of Danielson’s proposal. The association represents 18 commercial casinos throughout the state. Senate Study Bill 1068 calls for racetracks and both commercial and tribal casinos to be eligible to offer Internet poker.