Intertops Poker Wants to Send You to Milli Maker Event

Intertops Poker is launching a new three-stage Steps promotion that will see one player win his or her place in the Millionaire Maker Event at the WSOP in June. If you were thinking of attending this summer´s WSOP, this could be a cheap way into the valuable event, as the lowest entry point has a buy-in of just $1.10. 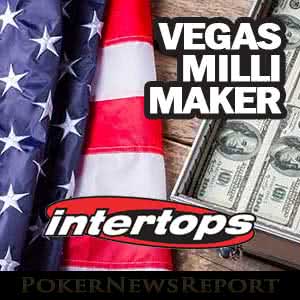 Intertops Poker is launching a new three-stage Steps promotion that will see one player win his or her place in the Millionaire Maker Event at the WSOP in June. If you were thinking of attending this summer´s WSOP, this could be a cheap way into the valuable event, as the lowest entry point has a buy-in of just $1.10.

The Millionaire Maker is one of the most popular tournaments in the WSOP schedule. Last year, the $1,500 buy-in tournament attracted 7,761 players and generated a prize pool in excess of $10 million – the biggest share of which ($1,221,107) was taken back to Canada by Quebec-based player Pablo Mariz.

This year, the tournament promises to be even more popular due to online satellites already running throughout regulated US states. For players still waiting for their state to regulate online poker, and for players in the rest of the world, Intertops Poker is launching a new three-stage Steps promotion this week that will see one player win a package to the million-dollars-to-the-winner event in June.

Each Milli Maker Step 2 tournament guarantees a seat in the Final qualifier on Sunday 15th April at 7.30 (*). This tournament can also be bought into directly for $110.00 and it guarantees at least one package to the Millionaire Maker tournament will be won – the package includes the $1,500 buy-in, six nights´ accommodation and $500 towards travel expenses.

If you want to leave it to the last minute to qualify, Intertops Poker will be hosting a “Last Chance Satellite” on Sunday 15th April at 4.30 (*) in the afternoon. This unlimited re-entry, hyper-turbo satellite is a bit of a crap shoot, but for a buy-in of $1.10 – and the potential to win a million dollars at the WSOP in June – it is a crapshoot well worth having a go at.

The Millionaire Maker is a “Must-Play” Event

Just in case you were considering winning the package and not turning up (or, more likely, selling the package on), that is not an option. The player that wins the Milli Maker promotion cannot exchange it, and is bound the by the terms of the promotion inasmuch you have to promote Intertops during the event by wearing a patch and you won´t get your travel expenses until your flights are confirmed.

Other than that you have nothing to worry about – other than battling your way through the Step 1 and Step 2 qualifiers before taking your seat in the Milli Maker Final. One important point to mention is that the level of traffic at Intertops Poker after Easter is traditionally low – especially during the midweek. Compared to other promotions offering seats into WSOP events – especially those in the regulated US states – Intertops is offering one of the easiest routes to Las Vegas this summer.

Not Playing at Intertops Yet? No Problem

If you are not yet playing at Intertops Poker, but would like to take part in this promotion, simply follow our links to the site from our [geolink href=”https://www.pokernewsreport.com/intertops-poker”]review of Intertops Poker[/geolink] and follow the instructions in our review for claiming your first deposit bonus. (Please also note the way in which Frequent Player Points are awarded towards clearing the bonus, as this is different from most other poker sites).

As we mention at the conclusion of our review “you won´t become an overnight millionaire playing at Intertops Poker, but you will have a pretty good time trying!” However, if you qualify for the Millionaire Maker event via Intertops´ Steps promotion, and then go on to win the target event, you could become a millionaire in a little over eight weeks’ time.