Players with an interest in attending the Barcelona MILLIONS series in April have an opportunity to qualify for the opening event from as little as $1.10 by playing at Intertops Poker over the next couple of weeks. The prize package also includes accommodation and a contribution towards your travel and expenses. 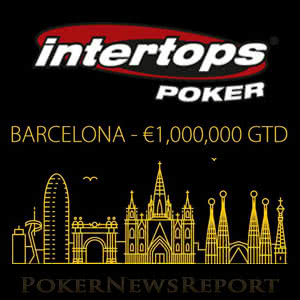 Players with an interest in attending the Barcelona MILLIONS series in April have an opportunity to qualify for the opening event from as little as $1.10 by playing at Intertops Poker over the next couple of weeks. The prize package also includes accommodation and a contribution towards your travel and expenses.

The Barcelona MILLIONS is a week-long series of live poker tournaments that takes place between Saturday 7th April and Sunday 15th April at the Casino Barcelona in Spain. The series culminates with a €10 million guaranteed Main Event; and, if the name, dates, and prizes seem familiar to you, this is because it is the same series as is being promoted by Party Poker LIVE.

In fact, if you are trying to qualify online for the Barcelona MILLIONS Main Event at Party Poker, the new Intertops Poker promotion could be of great interest to you as the prize being offered is a package to the opening event. This means you could arrive in Barcelona three days earlier, and play in both the opening event and the Main Event without having to change hotels!

How to Win the Intertops Poker Package

If you have played at Intertops Poker before, you are likely to be familiar with the qualification process for the site´s live event promotions. If not, here is a brief run-down.

Alternatively, players can take a chance on qualifying for the Satellite Final via a “Last Chance Wild West Satellite” hosted by Intertops Poker at 12:00 noon on the day of the target event. This $1.10 buy-in event really is the Wild West of satellites, with a hyper-turbo structure and unlimited re-buys available during the early levels. The last player standing will win his or her seat in that afternoon´s Satellite Final.

What the Intertops Poker Package Consists Of

The Final Satellite guarantees a minimum of one $4,500 package to the opening event of the Barcelona MILLIONS. There could be more than one package awarded depending on how many players enter the Final Satellite. Each package consists of:

The package is well worth winning, even if you are not intending to spend the full week in Barcelona and play in the €10 million Main Event. However, should you cash in the opening event and fancy your chances of a bigger prize, there are live Main Event mega-satellites being hosted by the casino on the day after the opening event finishes. You could in theory spin up a $1.10 buy-in into a share of €10 million. You will just have to pay for your own accommodation and re-arrange your flight home!

If this promotion appeals to you, please note that the Step 1 sub-satellites start today at Intertops Poker, with the Step 2 satellites starting tomorrow. If you do not already have an account with the site, please read our [geolink href=”https://www.pokernewsreport.com/intertops-poker”]Intertops review[/geolink] for an explanation of how the first deposit bonus works and how points are awarded for clearing the bonus because they are not standard processes.

Interestingly, we conclude our review by stating “you won´t become an overnight millionaire by playing at Intertops Poker”; but, if you qualify via the site for a seat in Event #1 of the Barcelona MILLIONS, and then spin your winnings up into a seat in the MILLIONS Main Event, it could be done within three months! That´s a pretty good deal for a promotion with an entry level of $1.10. See you in Barcelona!