Intertops Poker is continuing its quest to make an impression in the southern hemisphere with more promotions for Australian players. 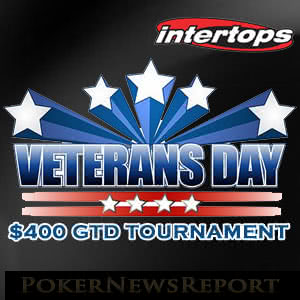 Intertops Poker is continuing its quest to make an impression in the southern hemisphere with more promotions for Australian players.

Back in July, Intertops Poker made a statement of intent about breaking into the Australian online poker market when it launched its first [geolink href=”https://www.pokernewsreport.com/intertops-introduces-australian-online-poker-tournaments-21791″]Aussie Tournament Series[/geolink]. The original series was followed by a second series [geolink href=”https://www.pokernewsreport.com/intertops-poker-throws-more-money-at-australian-market-21916″]at the end of September[/geolink] and, such was its success, special Australian-timed tournaments are scheduled for every Saturday and Sunday throughout November and December.

The site then launched another Australian-targeted promotion offering the winner a package to the opening event of January´s Aussie Millions. That too was successful, and Intertops Poker plans to give away another package this coming Sunday (more about this below). Now the site has revised its freeroll tournament schedule to give players in Australia the chance to win free poker money.

Intertops Poker may have a modest presence in the US, but its quest to make an impression in the southern hemisphere appears to be paying dividends. Peak traffic times at the site have often been around 10:30am Pacific time, which equates to 4:30pm in Perth and 6:30pm in Melbourne.

Win a Package to the Aussie Millions

As well as putting $1,500 on the tables each weekend, Intertops Poker is offering Australian players the chance to win an AU$3,500 package to the AU$1 million guaranteed opening event of the Aussie Millions. The package includes the buy-in for the event and accommodation at the Quay West Suites in Melbourne; and although players from the rest of the world are welcome to take part in this promotion, the package only includes US$500 towards travel expenses.

The package will be the first prize in an Intertops Poker tournament on Sunday at 5:00pm AEST (2:00am EST / 7:00am GMT). The event has a $110.00 direct buy-in and is supported by a satellite schedule that consists of a two-Step qualifying process (with buy-ins of $3.30 and $11.00) and a hyper-turbo re-buy and add-on qualifier (with a $1.10 buy-in) four hours before the target event. This is likely to be a popular event among most Australian players.

Freeroll tournaments are a well-tried method of attracting new players to a site, and Intertops Poker has extended its existing freeroll schedule in order that Australian poker players can get their hands on some of the free poker money available. The new schedule sees Daily Freerolls with $25.00 in cash prizes and $16.00 in tournament entry tickets running every six hours, with various $50 freerolls and $100 freerolls running throughout the week and weekends at Aussie-convenient times.

The tournament entry tickets given away in the Daily Freerolls – and those awarded to players who just miss the money in the $50 and $100 freeroll tournaments – can be used to enter “Just One Dollar” tournaments. Prior to this week, these daily $100 guaranteed events were scheduled for the early evening on the US Eastern Seaboard. Now Intertops Poker has scheduled two tournaments each day at 10:15am EST and 10:15pm EST which will better suit players on both sides of Australia.

Something for US-based Players as Well This Friday

This coming Saturday (November 11th) it is Veteran´s Day in the United States – a day that commemorates the end of hostilities in World War I. Intertops Poker is observing the occasion with a special $400 guaranteed Veteran´s Day tournament on Friday at 6:30pm EST. The buy-in for the 6-Max Freezeout event is $4.40, but players have the opportunity to win a seat for free in special freeroll tournaments at 6:15pm EST tomorrow (Thursday) and at 2:15am EST and 9:15am EST on Friday.

It would appear that no matter on what side of the world you live, there is something for everyone at Intertops Poker. If you are unfamiliar with the site, and would like to know more about what to expect when you play there, we have compiled our [geolink href=”https://www.pokernewsreport.com/intertops-poker”]Intertops review[/geolink] which explains about the generous first deposit bonus, the excellent VIP program and the other opportunities that exist at this US-friendly – and increasingly Aussie-friendly – online poker site.