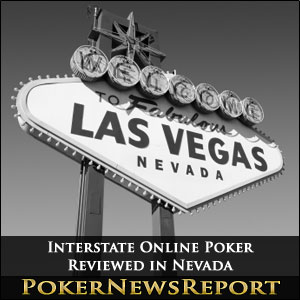 Two steps still remain in making the possibility a reality. The technical specifications must be developed by state gaming officials and Governor Brian Sandoval must enter into such agreements with other states.

Sandoval told VegasInc that preliminary discussions with other states have occurred, but that his hands are virtually tied until the GCB and Nevada Gaming Commission adopt the required regulations. Sandoval added that those regulations may be formally outlined sometime next month.

In attendance at the meeting were representatives from Nevada’s largest slot manufacturers, Bally Technologies and International Game Technology (IGT). Both will be major players in the Silver State’s online poker regime that was launched over four months ago with Ultimate Poker but has not rolled out any additional Internet poker sites since.

In addition to discussing online poker compacts, Bally and IGT are hoping to advance regulations that would permit progressive slot jackpots to include other states. The proposal would fashion slot jackpots in much the same way that the Powerball lottery is formatted, allowing multiple jurisdictions to take part.

The gaming commission’s John Moran Jr., a Nevada attorney who has considerable experience in brokering interstate compacts in non-gaming matters, has been appointed to establish the required regulations. Reappointed lead commissioner by Sandoval, Moran Jr. toiled as a slot machine foreman in Las Vegas prior to earning his law degree.

Sandoval signed a bill into law in February permitting online poker interstate compacts. Nevada’s relatively small population would make an intrastate online poker scheme difficult to sustain once all the companies that have been granted operator licenses bring their offerings to the Internet.

Wednesday’s 2 and 1/2 hour GCB meeting was held as an information gathering exercise, the results of which are passed on to the gaming commission for further review and public hearings. Those hearings will likely commence next month.