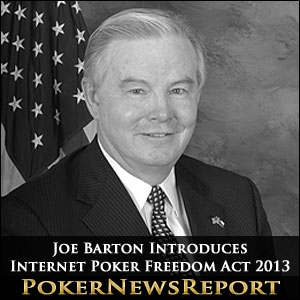 Ever since August of 2012, the prospect of Internet Poker returning to the United States has been gaining momentum. It was then that Judge Jack Weinstein ruled that poker was a game of skill and not chance, and therefore was not illegal under the Internet Gambling Business Act.

Since that time several states have passed legislation legalizing online poker. Virtual poker rooms are poised to launch in Nevada later this month, with New Jersey and Delaware set to follow suit. And now, thanks to a bill introduced in Congress, other states might have an easier time legalizing online poker. The bill, proposed by Rep. Joe Barton of Texas and entitled the “Internet Poker Freedom Act of 2013” allows for individual states to take matter into their own hands. It only applies to poker, as other casino games are viewed solely as games of chance.

The bill makes strong points regarding the benefits of legalizing online poker. For one, it states that online poker has the potential to introduce thousands of new jobs into the U.S economy. Secondly, it would provide the U.S government with an additional stream of much needed revenue. Online poker is a multi-billion dollar industry, and one that most of the free world is capitalizing on.

In order for Mr. Barton’s proposal to work, several measures would have to be placed into effect. It calls for the strict implementation of several rules which include prohibiting minors from playing online poker and preventing players from playing in states that do not participate in the system. The bill also suggests that problem gamblers should be able to get the help they so desperately need, and that players should be able to dictate how much they are willing to lose via limit losses.

Two years ago, Barton tried to generate interest in a similar bill – HR 2366, the Online Poker Act of 2011. However, the bill fell flat. But some believe that because poker is now officially recognized as a game of skill, the Internet Freedom Act of 2013 will fare better.

In addition to the aforementioned restrictions, the bill called for an Office of Internet Poker Oversight to be established in the Department of Commerce. It also calls for individuals and companies who break the rules to be subject to penalties, some as severe as $1 million per day. Under the legislation, cheating devices such as bots will not be tolerated, and credit cards would not be allowed to make deposits.

Ironically, the bill also calls for the reinforcement of the Unlawful Internet Gambling Enforcement Act of 2006. It is clear that through this measure, Barton wishes to place a deep divide between games that require skill and others that rely only on luck.