Consumer protection was the key issue in Tuesday’s hearing before the House Subcommittee on Commerce, Manufacturing, and Trade that addressed the legalization of internet gambling and online poker. 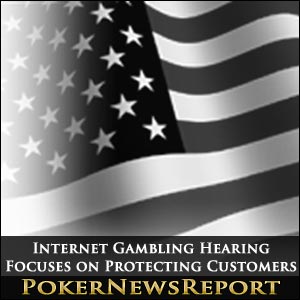 Consumer protection was the key issue in Tuesday’s hearing before the House Subcommittee on Commerce, Manufacturing, and Trade that addressed the legalization of internet gambling and online poker.

Unlike past hearings that have delved into the moral aspects of gambling, yesterday’s session debated mostly the issue of whether safeguards can be put in place to protect consumers.

Mary Bono Mack (R-CA), chairwoman of the subcommittee, began the hearing by stating that, “Clearly, the stakes are high and a showdown could happen on Capitol Hill in the following months.”  Mack went on to explain how gaming regulation is usually governed by the states individually, but that the legal issues involved are very complex. “Hopefully after today’s hearing, we’ll have an idea whether to hold’em or fold’em,” Mack told the hearing audience and thousands of online viewers.

FairPlayUSA Chairwoman Parry Aftab testified that her major concern was consumer protection. “It’s very much a matter of protecting our families and our kids,” she said. “It’s not a matter of whether gambling is immoral or not, but [whether] we can put safeguards in effect that aren’t in effect now. What’s happening now isn’t working.”

Law professor Kurt Eggert also confirmed the need for a safe environment for players, keeping in mind the recent debacle with Full Tilt Poker. “When I think about gambling, the question I have is what consumer protections should be in place,” Eggert said. “Gamblers used to be looked down on, but now they’re just consumers, so we should treat them as consumers as we would in other industries.”

Dan Romer, the Director of the Adolescent Communication Institute at the Annenberg Public Policy Center, persuaded lawmakers to secure safeguards for gamblers who are underage “Young people at a very early age are starting to gamble,” Romer said. “It’s very important for the committee and the Congress to think about what the impact will be on families and young people when it comes to online gambling. If we have gambling that provides safeguards and protects underage gamblers, it would be excellent to include in any legislation.”

Former U.S. Senator Alfonse D’Amato, now the Chairman of Poker Players Alliance, said that he was representing 1.2 million Americans who love to play poker. The game has been played online for the past 10 years and Americans will find a way to continue to play whether it is legal or not, D’Amato said. He urged Congress to clarify internet gambling laws and to regulate the industry so that billions of dollars that currently go to sites at offshore locations can stay in the U.S., “creating tens of thousands of good-paying jobs” and providing much needed revenue “all without having to raise taxes.”

A majority of the panel members agreed that online poker sites that now accept U.S. wagers shouldn’t be allowed to obtain internet gaming licenses. Presumably, that would include Full Tilt and PokerStars, which were shut out of the U.S. market last April. Aftab said that U.S. poker sites are not safe for consumers: “Consumers here don’t know where to go. We’re finding consumers with no place to go, no recourse, and law enforcement personnel that have no idea what to do.”

In a proposal offered by Eggert, many agreed that the internet site or “house” should be required to prominently display its “take” or probability of winning. D’Amato said that the PPA is in favor of such a requirement: “We would have no problem supporting legislation that calls for identification of what percentage the house keeps. That’s great consumer protection in putting it out there before they deal those cards.”

Several times throughout the hearing, the subject turned to poker software and the usage of poker-playing robots or “bots,” as they are commonly called. Bots are outlawed on most poker sites and are discouraged as detrimental to the game itself. Eggert was concerned that bots could give some players an advantage over others.

“The bot discussion distracted from the bigger picture issues a little bit,” PPA Executive Director John Pappas said after the hearing. “Bots, while they are a problem, are a controllable issue and sites do a great job of mitigating them. It’s going to be something we’ll go back to the committee on with a really thorough response.”  Rep. Barton has discussed amending HR2366 to impose jail sentences on repeat bot users.

The most outspoken critic of the proposal to legalize and regulate online poker appeared to be Rep. Gregg Harper (R-MS).

“The idea of online gambling, legal or illegal, gives me great concern,” Harper said. Harper felt that it was impossible to accurately identify players, including those who may be underage.

However, most of the legislators at the hearing appeared to be in favor of online poker, assuming poker sites can provide protection for players with gambling problems, prevent children from logging on to sites and to eliminate software that allows players to cheat against others.

Mack ended the two and one-half hour hearing by stating that the issues raised will be thoroughly investigated. A markup of HR 2366 was not announced. It is expected that the subcommittee will meet again in the next few weeks to tackle the issue further, or a hearing could also be scheduled by the parent of the subcommittee, which is the House Energy and Commerce Committee.

“The hearing was very encouraging,” Pappas said. “Unlike other hearings in the past where it was a debate about whether internet gambling should be regulated, today it was a question of when and how. They got into some real substantive issues, not all of them fully addressed. We’ll be working with the committee to get them the assurance they need.“