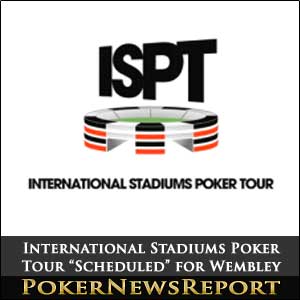 An intriguing video (below) has been circulating the poker forums and social networking sites in respect of a live poker tournament which is scheduled to be played at Wembley Stadium in London from May 10th to 12th 2012.

Promising a total prize pool of $30 million guaranteed, the video suggests that players will be participating in the game from video screens from seats around a main stage which will be the location for the final table.

Half the Size of the WSOP Main Event

When the video was first announced, it was speculated that it was a hoax and that no event was planned (A quick call to Wembley stadium confirmed that the stadium is not booked by the International Stadium Poker Tour for those days).  It was also considered that three days was insufficient to host a tournament with such a significant prize pool (about half the size of the WSOP Main Event), however it may well be that there is a considerable online qualification process before the final stages of the tournament, and that the size of the field (players, not Wembley!) could be considerably reduced in size by the time the climax is reached.

There is also a considerable amount of speculation that the event is going to be used by Groupe Bernard Tapie (GBT) to re-launch the Full Tilt Poker site should their takeover of the company be finalised by the New Year. French newspaper, Le Figaro, revealed on Sunday that GBT have a 30 per cent share in the company responsible for organising the International Stadium Poker Tour and, should the acquisition of Full Tilt Poker complete, this would be the ideal promotion to attract custom back to the site.

The conclusion of the video states that players have to visit www.ispt.com to register for the event but, as yet, no details are available about the buy-in, format and qualification procedure. Visit us frequently for the latest poker news on the International Stadium Poker Tour, or subscribe to our feed and follow us on Facebook and Twitter.