California’s Indian tribes that currently operate casinos in the state and non-tribal poker rooms have joined together in anticipation of legalized online poker in the golden state. 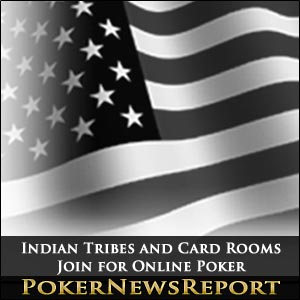 California’s Indian tribes that currently operate casinos in the state and non-tribal poker rooms have joined together in anticipation of legalized online poker in the golden state.

Out of 54 tribes that operate casinos in California, over half have partnered with card room operators to form a coalition known as the California Online Poker Association (COPA).

Pierre Wuu, COPA’s director, said that two bills have recently been introduced to the state legislature to regulate internet poker. The proposals, which are supported by both tribes and operators of [geolink href=”https://www.pokernewsreport.com/online-poker-rooms”]poker rooms[/geolink], are gaining momentum due to the state’s need for additional tax revenue. Passage of a law allowing intrastate poker would be a tremendous lift for state coffers because it has been estimated that two million California residents play online poker.

Last month, the 30 card rooms and 29 tribes that make up COPA launched a new free-play website called CalShark.com, where online poker enthusiasts in California can sign up and play poker for free. COPA’s idea is to be ready when online poker is legalized. It’s already registered players would have accounts and be accustomed to online play. All that would be necessary would be to switch from play or imaginary chips to real money and actual bets.

The idea of state-regulated poker rooms and tribal casinos joining together would have been ludicrous in years past. As most Californians would tell you, card rooms and Indian casinos have battled for years for a piece of the state’s prolific gambling business. Card rooms deeply resented that tribal casinos were able to offer roulette and slot machines, guaranteed moneymakers that card rooms were excluded from due to state regulations.

But now, fearing to be left out of online gaming if they are fighting each other over the issue, the old enemies are now holding hands, entering the unknown world of regulated online poker together. Although when legislation is enacted, tribal sovereignty issues will still need to be resolved.

What’s the past is the past, Wuu said. The tribes and card rooms in the California Online Poker Association are all on the same page. And we’re not looking back.

But not every Indian tribe in the state is ready to let bygones be bygones and join their non-tribal competition. David Quintana, the California Tribal Business Alliance’s political director, said that if internet poker were regulated and legalized, the very first casinos to provide affiliated gaming sites would gain the most.

The tribes in the California Online Poker Association are hoping to form a monopoly on online poker, so they don’t care if they have to team up with the card rooms, Quintana said.

Quintana sees other problematic issues too. He feels that even if internet poker legislation was passed, it would probably still take several months to conform an online site to the specifications of state regulators.

Wuu believes the turnaround time would be quicker than that since CalShark.com is already being beta tested. Technically, we’re ready, Wuu said. We just need to see the rules.

In a state strapped for cash, Democratic state Senator Lou Correa thinks that legislators have no choice but to seriously consider the potential revenue from internet poker. One study estimated the state’s take to be as high as $1.4 billion. It’s a matter of when, not if, Correa said.

That “when” may come as soon as January, as the California Legislature is scheduled to reconvene at that time and vote on Correa’s proposed bill.

Correa feels that regulation is crucial to guarantee players’ funds and to prevent minors from gambling online. He’s betting that players would be willing to allow some of their funds to go to fees and taxes in exchange for having their accounts protected against another “Black Friday,”  when the Justice Department shut down the top three [geolink href=”https://www.pokernewsreport.com/us-poker-sites”]U.S. poker sites[/geolink] and millions of dollars in players’ accounts were frozen. PokerStars eventually reimbursed their players, but Absolute Poker and Full Tilt Poker players are still waiting to be paid.

Quintana, however, always the pessimist, isn’t convinced. He feels that the big money players will play poker at the sites with the lowest fees and the most liquidity. If a player has not lost any money playing poker online, he doesn’t see a reason why that player would favor a state-sanctioned poker site that may cost more in taxes and fees to play.