Harry Law won the inaugural GukPT Leeds Main Event in the early hours of this morning after starting the nine-handed final table as the shortest stacked player. 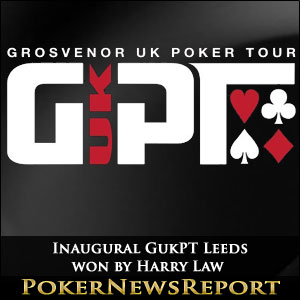 The Grosvenor Casino in Leeds Westgate was a new venue for the eighth leg of the Grosvenor UK Poker Tour, and 228 players qualified online or ponied up the £500 buy-in for the Main Event to easily beat the £100,000 guarantee.

The 23-player bubble burst late on Saturday night in the most unfortunate of circumstances – last woman standing Renee Xie getting her Aces cracked by a rivered set of Kings – and after several more short stacks failed to survive the last level of play, 16 players returned to the Leeds Westgate Casino on Sunday to play down to a winner.

The early levels of play on the final day were very cagey. It took four levels of play to reduce the 16 players to a final table of nine, during which time it became the norm for the short-stacked player to double up. Eventually Dom Mahoney rivered a King-high flush to bust Liam Crawford in tenth place K♥ Q♥ > J♥ 8♦ and we had our official final table.

When the final table got underway, the players were entering Level 23 with blinds of 10,000/20,000 (ante 2,500). Harry Law immediately started shoving, and twice got his hand through to pick up the blinds and antes; before another of the short-stacked players – Ben Turnstill – flopped a pair of Aces to double-up with A♠ 6♠ over Michael Howard´s 9♥ 9♠.

Harry Law then moved into a massive chip lead – first by forcing Martin Paul out of a valuable pot which four players had entered pre-flop, and then by eliminating Michael Devlin in ninth place 8♠ 8♣ > 2♦ 2♣ and Dom Mahoney in eighth place A♣ K♦ > A♥ 8♣ to be sitting behind a stack of almost 1.3 million chips.

Howard Lays Down a Challenge

Michael Howard became the second player to break through the million chip barrier when busting Willie Tan in seventh place 9♥ 9♦ > 5♥ 5♣ and, after an extended period of play without any eliminations, Howard also sent Ben Turnstill to the rail in sixth place courtesy of the 6♣ on the River which enabled Howard to win the hand 6♥ 5♥ > A♦ 8♣.

Jonny Cooper took a slice out of Harry Law´s chip stack when doubling up against the chip leader A♥ J♣ > A♦ 8♥; but Law moved clear of the rest of the field when flopping a pair of Kings to cripple Martin Paul K♣ Q♣ > A♦ Q♠. Martin Paul was eventually to bust in fifth place when Mark Evans paired his K♥ J♠ to best Paul´s 8♣ 8♥.

Cooper and Evans both Unlucky to Bust

Shortly after the game went four-handed, Michael Howard took over at the top of the chip counts when forcing Harry Law out of a substantial pot. Howard than bust Jonny Cooper in the most fortunate of circumstances – Cooper looking good to double up with K♦ K♥ against Howard´s A♠ 6♥ after the flop of 9♣ 3♥ 7♣, until the Turn (8♥) and River (5♣) gave Howard a runner-runner nine-high straight.

Harry Law doubled up against Michael Howard K♣ 10♠ > Q♥ 8♥ to leave Mark Evans as the short stack; and Evans was also unlucky to be bust from the GukPT Leeds Main Event – moving all-in with 2♣ 4♠ on the board of 10♠ 2♠ 2♦ / K♦ (for trip Deuces) but running into Harry Law´s 10♥ 10♣ for a flopped Full House. The case Deuce failed to appear on the River, and Mark Evans was out of the tournament in third place.

In the final hand of the tournament, both players had already seen the flop of 4♣ 10♣ 4♠ when Michael Howard raised to 100,000 chips. Harry Law responded by three-betting to 200,000 chips and Howard announced he was all-in. Law made the call and the cards were on their backs:

Harry Law was ahead after the flop, and remained in the lead after the Turn (A♠) and River (J♦) to win the inaugural GukPT Leeds Main Event and collect the £32,500 first prize.