California Assemblyman Mike Gatto recently proposed an online poker bill that has come under fire from a number of critics for several reasons. 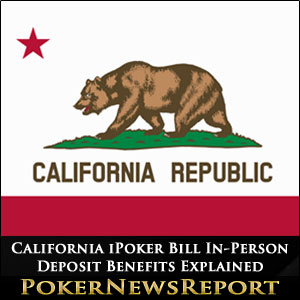 California Assemblyman Mike Gatto recently proposed an online poker bill that has come under fire from a number of critics for several reasons.

AB 9 excludes both bad actors and racetracks, which will be opposed by both those parties and has already been objected to by PokerStars and its coalition that includes cardrooms and Indian tribes. In fairness to Gatto, he stated upon proposing his ipoker legislation that it is meant to be a starting point for discussion, and the lawmaker is well aware that AB 9 is far from a finished product.

Also included in Gatto’s measure is a proposal that would require California online poker players to appear in-person at casinos or other approved gaming locations to make their initial deposits, as well as withdrawals over a certain as yet undetermined amount. The responses to that idea have been overwhelmingly critical.

Some claim that the whole convenience of playing poker online from one’s home would be negated. Others cry that only the diehard players will make the effort to deposit in-person, leaving recreational players on the sidelines. Still more critics have said that Gatto appears to be addressing problems that don’t exist, as it’s been proven that minors have not been able to access online gambling sites in the states that have launched under regulated regimes thus far.

Gatto recently penned an op-ed in the San Diego Union Tribune in which he explained the reasoning behind his idea that has been met with criticism by most. Gatto stated that he is merely borrowing “from established business practices” in including this requirement in AB 9. Those who open a bank account must first appear in person and show the proper identification in order to succeed. After that, most banking transactions can be done online. What is so wrong about requiring the same of online poker players?

And even though those in favor of online poker are fully aware that underaged gamblers are not gaining online access, the anti-online gambling crowd doesn’t believe it. One of the main arguments of igaming opponents can be effectively negated simply by requiring in-person initial deposits and withdrawals of larger amounts. Whether or not minors gambling online is or is not a problem would become moot simply by embracing and employing Gatto’s provision.

Not only would the argument about minors be addressed, but so too would the issue of money laundering. Those withdrawing or depositing large amounts of cash would be captured on security cameras, making it not the best option to launder money.

Also, smaller land-based gaming operators are concerned that they will be excluded from participating in California’s online poker scheme. Gatto explains that small gaming establishments would benefit from his proposal, as they can be set up as approved locations for accepting deposits, thereby allowing them to be the recipients of live play from those who have come to deposit.

I happen to agree with Gatto and believe that the in-person requirement is not the inconvenience that many make it out to be. It will quiet the anti-online gambling activists and keep minors out. It will create more live business for gaming establishments. It will greatly reduce fraud, money laundering and cheating. So you have to make a trip every now and then to deposit or withdraw. Isn’t that better than no regulated online poker at all?