A list of WSOP bracelet holders, final table alumni and high stakes players are among the impressive list of pros scheduled for the Poker Night Debut. 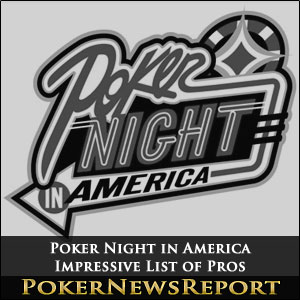 A list of WSOP bracelet holders and final table alumni and high stakes cash game players are among the impressive list of pros scheduled for the Poker Night Debut.

With Nolan Dalla at the helm, Rush Productions, the company behind Poker Night in America has assembled an impressive list of pros to participate in the tournament and a made-for-TV cash game that will film prior to the Main Event.

Those expecting a quiet, reserved game will be disappointed, as the game is stacked with outgoing poker personalities.  National Heads-Up Champion Mike Matusow, Phil Laak, Will Failla, prop bet king Gavin Smith and Dwyte Pilgrim are among the more out spoken players scheduled for the game and are bookended by WSOP Main Event Final Table pros Dennis Philips and Darvin Moon, neither known for their brash nature at the table. In the middle of these players is bracelet winner, Greg Mueller, Main Event runner up David Williams, Layne Flack, high stakes cash game specialist Eli Elezra, David “ODB” Baker, Shawn Buchanan, long time pro David Levi and 2013 bracelet winner Tom Schneider. They will be joined by East Coast based Matt Glantz, Shaw Deeb, and Amanda Musumeci.

Two players in the group were chosen by open auditions that Dalla held for the broadcasts. NY native Lauren Billings and Kristy Arnett made the cut and will be part of the broadcast. Billings has over $34,000 in reported live tournament winnings and made a final table at this year’s WSOP. Kristy Arnett is best known as a poker presenter and writer. She has over $11,000 in reported live tournament cashes.