Gambling expansion bills that include online poker have repeatedly surfaced in Illinois, but progress has been stalled by the state’s looming pension crisis. 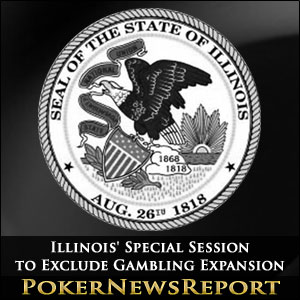 Gambling expansion bills that include online poker have repeatedly surfaced in Illinois, but progress has been stalled by the state’s looming pension crisis.

That crisis finds the Land of Lincoln in debt around $100 billion and having achieved the lowly distinction of being saddled with the worst credit rating of all 50 states. The state legislature’s spring session concluded May 31 without any progress on solving the dilemma. The result has been for Governor Pat Quinn to call a special legislative session for today in order to make a new attempt at putting a dent in the monstrous financial burden.

Proponents of gambling expansion believe that enactment of online poker legislation and adding new land-based gaming offerings throughout the state will go a long way toward alleviating at least some of the shortfall in funds. Unfortunately, Gov. Quinn has stated that he won’t listen to such matters until the pension crisis is resolved.

Illinois is viewed by many as a key state to establishing a successful interstate online poker regime throughout the country. With almost 13 million residents, the Prairie State ranks fifth in population among the 50 states. And with the country’s most populated state of California expected to go it alone and exclude itself from interstate partnerships, other huge states such as Illinois will be crucial to the overall scheme.

Quinn has vetoed gambling expansion bills in the past. He seemingly had a change of heart earlier this year when he stated that he would be open to such legislation provided that gaming companies refrain from making political donations in order to avoid the corruption that Illinois has long been noted for. But he flip-flopped again lately amid frustration over the pension crisis.

These wishy-washy tactics are certainly not new to politics. We saw it happen earlier in New Jersey when Governor Chris Christie repeatedly vetoed online gambling legislation before finally signing a bill into law in February of this year after lawmakers agreed to his conditions. The Garden State is now expected to launch its online gambling sites in November.

Perhaps the same scenario will be realized in Illinois. Gov. Quinn may eventually rubber stamp his approval of legislation that will allow online poker players to log on from their own homes. To the dismay of many, that issue won’t be addressed at today’s special legislative session. Until the state’s budget deficit is solved satisfactorily, gambling expansion will remain on the back burner.