Online poker and gambling were dropped from a gaming expansion bill in Illinois with indications that a standalone Internet bill will be proposed shortly. 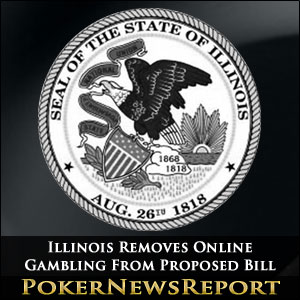 Online poker and gambling were dropped from a gaming expansion bill in Illinois with indications that a standalone Internet bill will be proposed shortly.

SB 1739 initially sought to expand gambling in the Land of Lincoln with additional land-based casinos, permitting slot machines at racetracks and airports, and allowing online gambling. The Internet wagering provisions of the bill were unceremoniously dropped reportedly to facilitate an agreement between Arlington Park racetrack and the Illinois Thoroughbred Horsemen’s Association (ITHA).

The Daily Racing Form has reported that a two-year contract between Arlington Park and ITHA was successfully reached only after legislators agreed to remove online gambling from SB 1739. The deal will allow Arlington Park’s scheduled meet for this year to begin as planned on May 3.

All indications are that SB 1739 will be approved by a Senate committee and voted on by the full Senate in a matter of weeks minus the Internet gambling language. This will likely improve the bill’s chances of becoming law due to the fact that Illinois Governor Pat Quinn has never been completely sold on online gambling to begin with. An Internet gambling proposal standing on its own will apparently be re-submitted.

The online gambling clause removed from SB 1739 was initially tacked onto the bill rather late and without warning and was opposed by a number of organizations. One of those groups in opposition was ITHA, whose protests center around the fact that Churchill Downs owns Arlington Park and is hoping to enter the U.S. online gambling market and not share any of its revenue with horsemen associations.

Should the online gambling proposal be re-introduced as a standalone bill as anticipated, you can expect ITHA and other horse breeders in Illinois to object unless they are included to receive a percentage of the revenue.

Illinois is not the only state where such issues have prevented online gambling legislation to reach the finish line. California’s proposed online poker regulations have also been repeatedly hampered by native tribes insisting that horse racing interests be excluded from a share of the revenue pie.