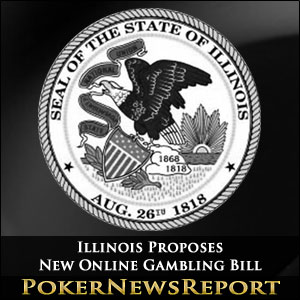 A previous online gambling amendment was recently dropped from a gambling expansion package that calls for five new casinos in Illinois and slot machines to be offered at state racetracks and airports. The Internet gaming provision in that proposed legislation was removed last month in order to facilitate a deal between the Illinois Thoroughbred Horsemen’s Association (ITHA) and Arlington Park racetrack.

When that online gambling amendment was mucked, it was believed that a standalone proposal would ultimately follow. That day has arrived with a 67-page draft that is similar to the previous measure. However, it is believed that Gov. Quinn isn’t any closer to embracing such legislation, even though he continues to search for ways to address state budget shortcomings.

The latest proposal calls for a Division of Internet Gaming to be created within the state lottery office, an idea bandied about often in the Land of Lincoln. The Illinois Lottery was largely responsible for the current push toward state-by-state online gambling schemes, as it was Illinois that requested the DoJ to clarify the 1961 Wire Act. The DoJ did so in late 2011, ruling that only sports betting was applicable to the act, which paved the way for Nevada, Delaware and New Jersey to enact forms of online gambling legislation.

If Illinois manages to join the mix under the current proposal, online gaming licenses would be awarded on a five-year basis following suitability determination and payment of a $250,000 application fee. Applicants would be limited to those currently licensed in Illinois in accordance with existing gaming statutes. A $20 million fee would be assessed upon the granting of licenses, with each licensee earning credit toward future taxation on revenue.

Tax rates would be established according to gross gaming revenue and divided among both fee-based and non-fee-based revenue. A rate of 20% would be assessed in the non-fee gaming revenue category and 15% for fee-based gambling proceeds. But the first five years of the plan calls for those tax rates to be sliced in half at 10% and 7.5 %, respectively, while working toward offsetting payment of the initial license fee.

A bad actor provision excludes applicants convicted of violating previous gaming laws for a period of 10 years. The operative word here is “convicted,” which would allow even PokerStars to participate. While many agree that PokerStars violated the UIGEA and continued to service the American market, the world’s top poker site was never convicted of any crime. In its settlement with the DoJ, PokerStars explicitly admitted no wrongdoing and federal prosecutors signed off on that agreement.

It may take some doing to get Gov. Quinn to be swayed toward favoring online gambling in the Prairie State, but at least lawmakers keep trying. Nevada is already offering real-money poker after the launch of Ultimate Poker on April 30. New Jersey and Delaware are likely to follow suit with a full slate of online casino games later this year. Illinois joins California and Pennsylvania as states hoping to eventually enact online gambling legislation also.