Illinois Gov. Pat Quinn’s recent budget address alluded to gambling expansion, but such an initiative may not include online gambling. 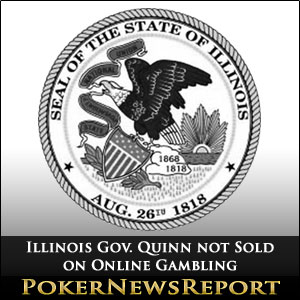 Illinois Gov. Pat Quinn’s recent budget address alluded to gambling expansion, but such an initiative may not include online gambling.

Quinn has repeatedly opposed past proposals to increase gambling in the Land of Lincoln, but earler this month seemed open to the idea under the right conditions. Those conditions include benefits to the state’s pension and education programs, as well as prohibiting campaign contributions from gaming companies.

Senate Bill 1739, which includes online gambling regulations, was voted on favorably by an Illinois Senate committee roughly three weeks ago. The measure calls for a new Division of Internet Gambling to be responsible for an online wagering regime.

But Quinn told WUIS News that he has problems with the online gambling legislation. The governor said that the issue is too new and has not been fully reviewed. Quinn felt that the Internet legislation was tacked onto the gambling expansion measure at the last minute.

Sen. Terry Link (D-Waukegan) sponsored the proposal and recently amended the bill’s bad actor clause to prohibit only those companies convicted of breaching U.S. laws from participating in the state’s online poker scheme. But that may all be for naught as Quinn is having difficulties warming up to the idea of Internet gambling.

Illinois has the potential to be a gold nugget to Nevada, New Jersey and Delaware in any interstate online poker format. The Prairie State ranks fifth in population with roughly 13 million residents. However, persuading Quinn to come around on the idea of online gambling may be a herculean task.

Last year, Illinois lawmakers revised a gambling expansion bill that included intrastate online poker three times before time ran out in the legislative session without the proposal ever landing on Quinn’s desk. Many insiders speculated that the governor would have exercised his veto powers on that measure.

Two months still remain in this year’s legislative session, so lawmakers still have time to convince the steadfast Quinn on the merits of online gambling legislation.