In a move that many feel is the precursor to a completely new era of online gambling in the US, Illinois became first state to sell lottery tickets online to its residents. 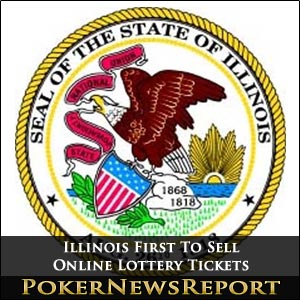 In a move that many feel is the precursor to a completely new era of online gambling in the United States, Illinois became the first state to sell lottery tickets to its residents via the internet.

A direct result of the Department of Justice (DoJ) ruling released last December stating that 1961 Wire Act only applies to sports betting, Illinois sold lottery tickets online on Sunday, March 25, for the first time on an intrastate basis. The DoJ memorandum opinion that paved the way for the online lottery sales was in response to the states of New York and Illinois requesting clarification on the law in an effort to sell lottery tickets over the Internet.

The DoJ ruling also has inspired states such as Nevada, California and New Jersey to propose internet poker legislation with a goal of launching [geolink href=”https://www.pokernewsreport.com/online-poker-rooms”]online poker websites[/geolink] sometime this year. Nevada has already approved Internet poker regulations and several other states are making moves to follow their lead.

In regards to Internet lottery sales, many states are monitoring Illinois and are said to be considering online lottery legislation of their own. According to American Gaming Association president Frank Fahrenkopf, as many as 21 states are contemplating some type of online gambling scheme, such as poker or the lottery, the USA Today reported.

Illinois Lottery officials said that online sales are the best way to keep pace with the changing times and to also bring much needed revenue to the financially struggling Prairie State. “There are lots of people who buy most of their products over the Internet,” said Illinois Lottery Superintendent Michael Jones.

Critics of online lottery legislation believe that sales over the Internet will create a multitude of problems, including underage gambling and a sharp increase in addictive gamblers. Jones said that safeguards are in place to prevent minors from buying lottery tickets, such as requiring customers to provide Social Security numbers, addresses, and checking a box that verifies a minimum age of 18. He also believes that the lottery is not conducive to addictive gambling.

“Lotteries are a very, very different form of gambling because of their nature,” Jones said. “You risk a small amount against very long odds. We don’t offer the knid of action that’s usually associated with addictive behavior.”

Tickets for Lotto and the Mega Millions lottery games were available in Illinois Sunday. More game offerings, including Powerball, could possibly be added in the future. Any new lottery games would require approval from the state legislature. The Illinois Lottery was established in 1974. Throughout the years, lottery sales have contributed over $17 billion to state funding, including Illinois schools and other projects.