A judge in Illinois has dismissed a class action brought against PokerStars´ owners Rational Enterprises which could have cost the company millions of dollars. 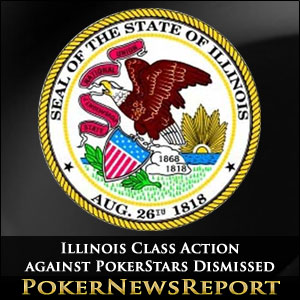 A judge in Illinois has dismissed a class action brought against PokerStars´ owners Rational Enterprises which could have cost the company millions of dollars.

The complaint against Rational Entertainment Enterprises Ltd was brought by lead plaintiff Kelly Sonnenberg on behalf of her son and hundreds of thousands, if not millions, of Illinois residents who had online poker accounts with PokerStars prior to Black Friday in April 2011.

It was alleged in the action that the plaintiffs (or those they were representing) lost money on PokerStars, and – as PokerStars was allegedly operating an illegal gambling operation at the time – the plaintiffs were entitled to reclaim that money under Illinois´ Loss Recovery Act.

According to the Act, if the plaintiffs had proven their case, they could have claimed up to three times the amount lost in illegal gambling from PokerStars over the five year period from the passage of UIGEA until Black Friday – potentially millions of dollars.

Details of the Case against PokerStars

It was claimed that Scheinberg, Tate, Burtnick and the shell companies listed in the class action were responsible for the operation of PokerStars – which was shut down by the US Department of Justice (in April 2011) and the defendants indicted for alleged wire fraud, money laundering and violating state and federal gambling laws.

As the company actions were alleged to be in violation of Illinois´ criminal code, the plaintiffs claimed that they were entitled to sue for losses. They requested a jury hearing (which was tentatively scheduled for April 2015) but lost a request for a full discovery last August.

PokerStars filed an application for the case to be dismissed alleging failure to state a claim and lack of personal jurisdiction and, at the United States District Court for the Southern District of Illinois, Chief Judge David R Herndon found on PokerStars´ favour.

The judge said that the class action was faulty because under the state´s Loss Recovery Act, funds could only be recovered from the winner in an illegal gambling transaction. Judge Herndon said that, although PokerStars collected a rake from each hand, the site did not participate in or benefit from the outcome of the hand.

He added that PokerStars was more akin to a third party service provider and unless it could be proven that the defendants had participated in the games themselves, and won bets placed at the tables, they could not be considered liable for the losses of others.

PokerStars Reaction to the Verdict

Although Judge Herndon has given Kelly Sonnenberg leave to amend her complaint, Rachel Hirsch and David Deitch of Ifrah Law (who were representing PokerStars) believe that the judge´s effective dismissal of the case pretty much spells the end of this lawsuit.

Rachel Hirsch stated in a press conference after the decision was announced that she believes it will be virtually impossible for Kelly Sonnenberg to make any further justifiable allegations, while David Deitch commented he hoped “that judges in Kentucky and other states with similar loss recovery statutes will recognize the simple but important principle that a ‘rake’ does not make a company a ‘winner’.”