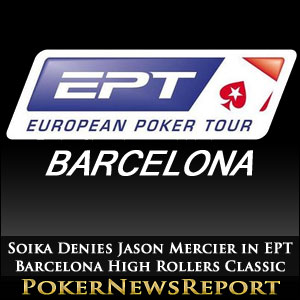 Incredibly it has been three years since Jason Mercier won his last high rollers tournament (at the Five Diamond Poker Classic in 2011) – incredible because he always seems to be cashing in these high buy-in events. A second place finish in the 2013 EPT Monaco High Rollers was followed by a third place in the Aussie Millions $25,000 Challenge, a third place in the WPT Alpha8 in Johannesburg and another runner-up finish in the $100,000 buy-in Super High Rollers event at the Bellagio in June.

By comparison, Ihar Soika is better known as an online player. Under the pseudonym “OMGitshunt”, Soika has won more than $3 million online including a SCOOP event in 2011. His live portfolio only started in this event last year with an eleventh place finish for €33,500, and his biggest live poker cash before this event was an eighteenth place finish in the Estrellas Poker Tour High Rollers last week for €38,100. However, as the third day of the EPT Barcelona High Rollers got underway, a Soika/Mercier climax looked one of the most unlikely pairings for the heads-up.

Day 3 Begins with 21 Players Still in the Event

An incredible 393 entries were received for the EPT Barcelona High Rollers and, due to the large volume of players, the action on Day 2 was extended by a level to make the final day manageable. There were still twenty-one players involved in the event when play got underway at noon at the Casino Barcelona – led by Aussie Millions Main Event winner Ami Barer (1,953,000 chips) ahead of Ismail Erkenov (1,920,000 chips) and Dmitry Yurasov (1,900,000 chips). At the time Ihan Soika was placed in fourth (1,650,000 chips), and Jason Mercier was holding a midfield position with 888,000 chips.

The early action was particularly frantic, and saw Dmitry Yurasov move into a commanding chip lead with the elimination of Angel Guillen (K♥ K♣ > A♥ J♠), while Jason Mercier flopped a set of Queens to double up against Alexander Roumeliotis. Mercier acknowledged that he was extremely lucky to double up against Ihar Soika 8♦ 8♥ > 10♣ 10♦ when he hit a set of Eights on the Turn; but Soika scored a massive pot when his 7♦ 5♦ improved to a Queen-high flush against Carlos Chadha, and led the field as the final nine players congregated around one table.

Soika Soars and Slips as Panyak and Chadha Bust

Soika´s elimination of Panyak was the springboard for him to build his chip stack up towards 10 million chips – forcing Stephen Chidwick and Ami Barer off of big pots before flopping a pair of Kings to take a million chip pot from Ismail Erkenov – before he doubled up Benjamin Pollak 10♣ 10♠ > A♦ Q♠ and Ami Barer Q♥ 10♥ > 10♠ 10♣ to slip back down to 6.2 million chips.

Just before the dinner break Carlos Chadha was crippled by Stephen Chidwick in a hand in which Chidwick won with King-high after Chadha had missed an open-ended straight draw. Chadha got the last of his chips in with Q♣ 8♣ after the flop of K♠ K♣ 3♣, but Chidwick had a pair of Sixes which held to bust Chadha in eighth place.

Coming back from dinner (Level 28 – blinds 50,000/100,000 – ante 10,000), Jason Mercier was sitting in seventh place of the seven remaining players with just seven big blinds. However, an uncontested shove and a double up against Stephen Chidwick (K♦ K♠ > A♠ K♥) was followed by another double up when he cracked Ami Barer´s Aces with trip Tens to increase his stack to 3.48 million chips.

Soika Wraps up EPT Barcelona High Rollers within an Hour

Again , a Soika/Mercier climax looked one of the most unlikely pairings for the heads-up, but a double up by Jason Mercier against Ami Barer J♠ J♦ > 7♥ 7♦ reversed second and fourth positions before Mercier found pocket Aces to eliminate Barer (A♣ J♦) in third place and take over at the top of the chip counts.

Ihar Soika took over as chip leader when forcing Mercier off of a 2 million chip pot, and then took a 13,510,000 -v- 6,140,000 chip advantage into the heads-up against Mercier when eliminating Ismail Erkenov in third place K♣ Q♠ > A♣ 2♦ with a flopped Ace-high straight.

The heads-up climax to the EPT Barcelona High Rollers lasted just ten minutes. Jason Mercier responded to a three-bet pre-flop raise from Ihar Soika by announcing he was all-in. Ihar Soika made the call and the cards were on their backs:

The flop of A♣ 10♥ 3♦ made Ihar Soika a 91% favourite to win the hand and the EPT Barcelona High Rollers title – odds which improved to 95% after the 5♦ on the Turn. Mercier could still survive with a Six, but the 2♦ on the River sealed the tournament for Ihar Soika and Jason Mercier was once again denied victory in a high rollers event.