Igor Kurganov, the breakout German player who finished second behind Bertrand Grospelier in the EPT Madrid Hi-Rollers Event, looks to go one better in London today as he leads the final eight players into the last day of three. 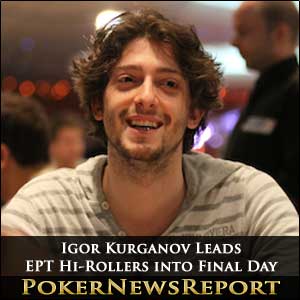 Igor Kurganov, the breakout German player who finished second behind Bertrand Grospelier in the EPT Madrid Hi-Rollers Event, looks to go one better in London today as he leads the final eight players into the last day of three.

In complete contrast to the cut and thrust of the EPT Main Event, this Hi-Rollers tournament has been played at a pace that would best be described as sedate. It has taken two long days for the original field of 75 to be reduced to just 8 – each of whom have paid £20,500 to participate in the event in pursuit of the £511,300 first prize. All of the remaining players will be guaranteed to collect at least £58,400 after a deal was made at the unofficial final table to award the ninth player out a “token” £25,000.

Four key hands led to Igor Kurganov´s ascension to the top of the leaderboard. From starting the day on the 100,000 chips mark, Kurganov took a 275,000 chip pot when rivering a straight against Rob Avery´s set of fours. He then rivered a flush to send Phil Collins (Q♥ Q♠) to the rail in twelfth, before his 7♠ 7♦ held up against Byron Kaverman´s A♦ 10♣ and he then crippled James Bord with a turned Ace against Bordy´s pair of Queens.

The total entry of 75 players included some of the best known names on the current international poker circuit. Winner of the PCA Super Hi-Roller Event Eugene Katchalov, WSOP Main Event winners Joe Hatchem and Jonathan Duhamel, Epic Poker League victor  Mike McDonald, and November Niner Philip Collins were all among the players who turned up for Day 2 but will be sight-seeing around London on Day 3 as a quality field was depleted during the day.

WSOPE on Their Minds?

Last man out – James Bord in ninth – was winner of the WSOPE Main Event this time last year, and many of the players competing in this event will be packing their suitcases for the short trip to Cannes as soon as the Hi-Rollers is concluded – hoping to emulate Bordy´s $1.2 million victory in this year´s renewal. But for today, play will be starting at noon with blinds of 4,000/8,000 and a 1,000 ante with the chip counts looking like this:-