Ignition Casino, one of the most recognized names in the United States online poker market, made a huge announcement that they’re coming to Australia. 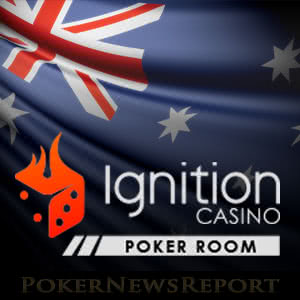 Ignition Casino, one of the most recognized names in the United States online poker market, made a huge announcement that will undoubtedly make a lot of folks “down under” very excited: they’re coming to Australia.

Ignition represents one of the most well-known brands in the U.S., and are one of the few iGaming companies that offer both online poker and casino games to Americans. In fact, the site averages well over 1,000 to 2,000 cash game players (MTT players are included in this figure) during peak times and is one of the biggest poker sites in the world despite only accepting United States customers.

The above numbers are expected to rise dramatically in wake of the news that they are expanding their reach to now include Australian gamblers, which could potentially exceed well over a million people in the region alone. The shared player pool between the USA and Australia could eventually see [geolink href=”https://www.pokernewsreport.com/ignition-casino”]Ignition Casino[/geolink] [geolink href=”https://www.pokernewsreport.com/ignition-poker”]and Poker[/geolink] leapfrog long-time competitor 888 Poker very soon, especially given the popularity of online gaming in Australia.

Why is Ignition making this move now?

The easiest reason behind Ignition making this move now is most likely to take advantage of a market that has seen some of its biggest rivals pull out of the country as of late, [geolink href=”https://www.pokernewsreport.com/888poker-withdraws-from-australian-market-at-short-notice-21119″]including the likes of 888[/geolink], 32Red and Royal Panda. More and more operators are [geolink href=”https://www.pokernewsreport.com/australian-bill-could-force-withdrawal-of-poker-sites-21021″]expected to leave Australia’s lucrative betting market[/geolink] in the coming months, with reports that even gaming juggernaut Pokerstars will most likely exit the country soon enough.

With new gaming laws expected to be put into place by the end of 2017, Australia’s market share in the online gambling world is clearly up for grabs. In fact, there have been more companies opening their doors to Australian customers as other doors have been shut on them in recent months. Ignition is one of the more well-known brands to welcome Australian casino and poker players with open arms, despite knowing full well they will be operating in a “grey area” according to the country’s newest revisions regarding the Interactive Gambling Act of 2001.

What do the country’s new laws have to do with all of this?

This not-so-surprise move by Ignition comes in wake of the controversial IGA bill of 2001 being amended by the Australian Senate earlier this year. The original Interactive Gambling Act 2001 called all forms of online gambling to be banned in the country, including online poker and online casino games. However, it was never strictly enforced, as online gaming companies still operated in Australia well after the bill was put into law.

This was easy to do as the original IGA had many loopholes that allowed iGaming companies to conduct their business without fear of financial repercussions. Well, after a strict review conducted by Australian lawmakers, those loopholes that helped many operators skate around the IGA 2001 have now been closed up. The new bill, aptly called the Interactive Gambling Act 2016 (or “IGA 2.0”), clamps down on most forms of online gambling – [geolink href=”https://www.pokernewsreport.com/australian-senate-rejects-proposal-and-bans-online-poker-21481″]including poker and live sports betting[/geolink].

Although most would think that kind of tough language would stop most companies from even taking the chance of accepting players from Australia, Ignition isn’t your average company. Despite laws like UIGEA being put into effect years ago, companies like Ignition have operated in defiance of lawmakers in the United States and have accepted players there for as long as they’ve been in existence. So while this is clearly a bold play on behalf of Ignition, it’s something they’ve been used to doing for quite a long time now.

Time will tell regarding how successful Ignition will be in Australia. However, if they can even come remotely close to replicating the success they’ve had in the USA, I think it will be safe to assume that online poker will have a new powerhouse in the years ahead.