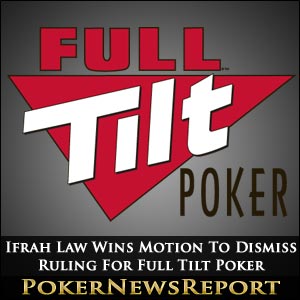 The Ifrah Law firm announced they have won a favorable ruling on behalf of Full Tilt companies and the individual poker professionals who were named as defendants in the first class action suit brought by former U.S. Players in the United States District Court for the Southern District of New York last summer.

The suit, which involved complex fraud issues arising out of claims of conversion and civil RICO, was the result of Plaintiff’s demand for return of U.S. player funds that held in Full Tilt player accounts after the government shut down on Black Friday. Ifrah Law was able to obtain a dismissal of ALL claims against the individual poker pro defendants, as well as all RICO claims against the corporate defendants.

The lawsuit demanded not only a return of Plaintiff’s money under a conversion claim, but it also accused the defendants of racketeering, which would have entitled Plaintiffs to treble damages (or three times the amount owed). Plaintiffs alleged that the that the only reason players suffered losses was due to executives and others associated with Full Tilt companies willfully committed wire and bank fraud and money laundering.

In his January 30, 2012 Order, U.S. District Judge Leonard B. Sand held that Plaintiffs did not have standing to institute their RICO claim. Specifically, Judge Sand found that it was not clear at this point in the litigation

Although this case will proceed with respect to some of the corporate defendants, Judge Sand’s Order represents a victory for them as well. The dismissal of the RICO claims against the corporate defendants signals to other plaintiffs that the events leading up to Black Friday and post-Black Friday may not be as clear cut as they may appear in the pending criminal indictments. The dismissal also limits the types of damages to which these defendants may have been exposed to had the court allowed the claim to proceed.

Jeff Ifrah, founder of Ifrah Law hopes the Court’s decision will incentivize others to quickly abandon their law suits.

The Court’s decision recognizes that relief for the players is being pursued by the United States. There is no compelling basis to open additional doors for private class action lawyers to pursue that very same relief.