Germany came out on top over the weekend in the inaugural Nation’s Cup hosted by the International Federation of Poker (IFP) in London in which twelve countries participated in a duplicate poker competition designed to show the world that poker is a stimulating and challenging mind sport as opposed to a game of “chance.” 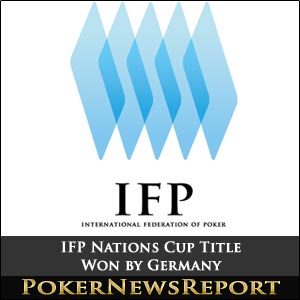 Germany came out on top over the weekend in the inaugural Nation’s Cup hosted by the International Federation of Poker (IFP) in London in which twelve countries participated in a duplicate poker competition designed to show the world that poker is a stimulating and challenging mind sport as opposed to a game of “chance.”

Each country of the participating twelve countries were represented by six players who competed in duplicate poker. Very much like duplicate bridge, duplicate poker uses preset decks of cards identical for each separate table. Players earn points based on the skill in which their hands are played versus the play of their opponents seated at other tables who hold identical hands.

The excitement of the event was increased when players at each table sat in a car of the London Eye, Europe’s biggest Ferris wheel. This had the effect of sequestering each of the twelve tables so players had no idea what was happening with their competition.

The new event experienced some complications. Scoring hands proved somewhat difficult, so the IFP decided to abandon the planned format of removing nations with lower scores after one day of play. Instead, all twelve participating nations were allowed  to return and play a second day.

“Our sole concern is to ensure fairness for all of the players and because of that (the scoring problems) this was not a difficult decision,” IFP President Anthony Holden said prior to the start of the second day of competition, which was Friday. “(Thursday’s) play clearly demonstrated the tremendous appetite players have for team duplicate poker and the chance to represent their countries.”

The twelve countries competing were placed into two separate groups. Group A consisted of Germany, Spain, Denmark, United States, Ireland and Team Zynga; Group B was made up of France, Japan, Holland, Australia, Brazil and the United Kingdom. After playing the initial round of 36 duplicate poker hands, three teams from both groups proceeded to the final round, a scheduled 72 hands to determine the champion of the Nations Cup.

There were a few surprises following the completion of round one. Group A moved Spain, Germany and the team representing Zynga, who led through a good portion of the first round, while Group B saw Holland, France and Brazil advance to the next and last round. The U.S. and UK shocked more than a few observers in finishing out of contention after only the first round.

After the final round was completed and final points were tallied, Team Germany, with captain Stephan Kalhamer and featuring Sandra Naujoks and Sebastian Ruthenberg, totalled 24 points and won the title. The inaugural Nations Cup champs won by a slim margin over both Brazil and France, who tied for second place with 22 points each. The chip count tiebreaker gave Team Brazil the second place silver medal.
Team Zynga, made up of players with very little live poker experience, demonstrated their poker skills by finishing in fourth place, an impressive showing for online amateurs against the pros they were pitted against. Holland and Spain came in a tie for fifth place, but Team Holland led in chips to squeak out the tiebreaker.

In the second tourney of the two-tournament Nations Cup, promoted as “The Table,” Raul Mestre of Spain bested 134 other players to capture the $250,000 first place prize in a deep stack No Limit Hold’em event.