A day of surprises on the final day of the €1,000,000 Irish Open in Dublin was concluded by tournament winner Ian Simpson proposing to his girlfriend Emma. 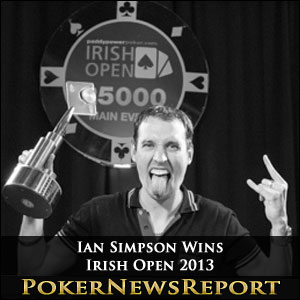 A day of surprises on the final day of the €1,000,000 Irish Open in Dublin was concluded by tournament winner Ian Simpson proposing to his girlfriend Emma.

Ian Simpson had enjoyed his fair share of good fortune throughout the final table of the Paddy Power Poker-sponsored Irish Open, but none more so than when Emma agreed to marry him after the presentation of the winner´s trophy and €265,000 first prize.

Indeed, the Burlington Hotel has been a happy hunting ground for the science teacher from Newcastle, who finished fourth in last year´s event and won a bonus for being the “Sole Survivor” (the last online qualifier to exit the tournament) which included his entry into this year´s Main Event.

How the Final Day Played Out

The final table of the Irish Open was led by Tom Brady – winner of the International Poker Open in Dublin last November – while the two short stacks – Mark Davis and Michael Farrelly – were in no immediate danger as, when play resumed at the Burlington, blinds were 20,000/40,000 with an ante of 4,000.

Simpson First out the Traps as Fallon Folds

Ian Simpson wasted no time in improving his position by taking a million chips from Namir Mohammed with a rivered two pair (Sixes and Sevens) and moving up to second place on the chip counts. Adam Fallon then doubled up Mark Davis (A♣ 9♣ > 7♥ 8♥) to leave himself as a short-stack before busting out in eighth against Michael Farrelly (A♠ K♣ > A♣ J♣) before the end of the first level.

Farrelly then won a race to chip up against Calvin Anderson (7♣ 7♥ > A♦ Q♣) before chip leader Tom Brady was crippled in two hands – first against Ian Simpson when Simpson (6♦ 4♥) flopped trip Fours against Brady´s (Q♥ 10♥) top pair, and then running his flopped top pair (J♦ 10♦) into the overpair (Q♥ Q♠) of Calvin Anderson.

Tom Brady quadrupled up the one big blind he had remaining in the next hand, but eventually succumbed to the inevitable when he failed to connect with the board with 3♦ 6♠ against Namir Mohammed´s paired Ace and was eliminated in seventh. Then came one of the sickest hands of the final day to cripple the aspirations of Declan Connolly.

Anderson, Mohammed and Davis all Miss their Outs

A period of three quick eliminations then occurred when players were busted from the tournament for failing to hit. Calvin Anderson was possibly the unluckiest, getting all his chips in with Q♣ 5♠ against Michael Farrelly´s 3♦ 3♣ and missing all the outs after a flop of K♥ J♣ 10♣. Farrelly hit the 3♥ on the river to add insult to injury but, as this year´s “Sole Survivor”, Anderson at least had the consolation of a €60,000 cash prize to add to his €49,000 prize for being eliminated in fifth.

The heads-up lasted only two hands. Farrelly won the first with a three bet pre-flop raise to chip up to 4 million and, in the second, raised Ian Simpson´s 1 million chip bet on the flop of Q♦ 5♠ 6♣ by shoving all-in. Simpson called and the cards were rolled onto their backs.

The turn card 8♦ completed Farrelly´s straight and he looked favourite to double up and take the chip lead in the Irish Open Main Event; however the 2♦ gave Ian Simpson a backdoor runner-runner flush and he instead became the 2013 Irish Open Champion.

Nobody except Ian Simpson knows exactly how much the diamond ring he offered to girlfriend Emma cost, but with a cheque for €265,000 in his back pocket after winning the Irish Open, it is fairly sure he can afford it!