After 2 days of the World Poker Tour Marrakesh Main Event, an Irishman who lives in Spain heads a Moroccan who lives in Sweden ahead of a Canadian who has never won a cent of his $9 million lifetime poker earnings in his home country. 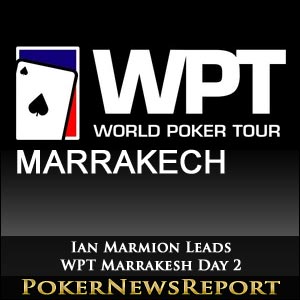 After 2 days of the World Poker Tour Marrakesh Main Event, an Irishman who lives in Spain heads a Moroccan who lives in Sweden ahead of a Canadian who has never won a cent of his $9 million lifetime poker earnings in his home country.

Ian Marmion – former head of Victor Poker Ireland and now comfortably settled in the up market Spanish resort of Sotogrande – enjoyed a sensational day at the Casino Es Saadi in Marrakesh to lead the WPT Main Event ahead of Fadhil Fadag and WSOP Main Event champion from 2010 Jonathan Duhamel.

A Nice Weekend Away

Ian, who brought his wife and children across the Mediterranean fully expecting to be eliminated on Day 1, started Day 2 in second position with 158,500 chips behind overnight leader Mohamed Ali Houssam and benefitted (in his words) “from the looseness of the Moroccan players”.  Using 4-bets and 5-bets to bully players out of pots, the only set back Ian experienced on his ascendancy to the top of the leaderboard was when running his pocket Kings into the Aces of Sam El Sayed. Ian finished the day on 379,000 chips – little more than one big blind ahead of Fadhil Fadag.

A Day of Recoveries

Former WSOP Main Event champion Jonathan Duhamel also enjoyed a profitable day 2 in Marrakesh, recovering to take third place on the leaderboard after having his starting chip stack reduced by half in Level 2 of Day 1. His most notable hand of the day came shortly before dinner when he called the four-bet pre-flop shove of David Sacksick (K♠ 7♣) with pocket Kings and temporarily took the chip lead. Remarkably, Sacksick recovered to close the day on 182,500, while Sam El Sayed – who had been down to 60,000 chips prior to chipping up against Ian Marmiom – goes into Day 3 with 246,000 chips, and Bertrand “ElkY” Grospellier – a player experiencing a different type of recovery after losing his fight with Lex Veldhuis –  continues to fight on (despite a noticeable limp) with 293,500 chips.

Where Can We Spend These?

Despite the buy-ins for the WPT Marrakesh Main Event being in Euros (€2,700 + €300), the prizes for the tournament have all been announced in Moroccan Dirhams (or MADs as they are abbreviated to on the international currency exchange markets). All the 33 players who cash in the event will be very happy to pick up their cheques until they realise that you have to divide MADs by eight to get their dollar value and by eleven to work out what they are worth in Euros. Here is a rough guide to what the 50 players who remain in the event are aiming for:-

When the 50 remaining players take their seats at the Casino Es Saadi in Marrakesh, the blinds at the start of the day will be 2,500/5,000 with a 500 ante. The average chip stack is 164,400 and, with 13 of the players having less than twenty big blinds, we can expect the action to be as fast and as furious as in the preceding two days. Make sure you visit Poker News Report over the weekend to see if Ian Marmion can maintain his lead, or whether his wife will drag him out shopping around the market stalls at Jemaa El Fna!