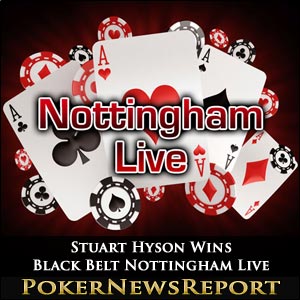 It was Black Belt Weekend at the Dusk till Dawn Poker Club in Nottingham – not a new variation on the game of poker a la ElkY v RaSZi in Estepona this week – but a series of tournaments comprising the cream of British poker talent.

The focus of the weekend was the $50,000 guaranteed Black Belt Poker Main Event, a $125.00 buy-in tournament in which bounties were placed on a number of Black Belt Professionals – the value of which depended on the players´ own Black Belt Poker ratings (plus everybody got a chocolate Bounty Bar). Satellites for the Main Event had been running for several weeks on the Black Belt poker web site and (unlike the forthcoming online/live iPOPS series), the event smashed its guarantee – enabling 90 players to cash in the tournament.

After two Day 1s and a day-and-a-half long Day 2 (the tournament finished shortly before 3.00am), Stuart Hyson emerged victorious and captured the $15,500 first prize, when his K♦ Q♣ caught the K♥ on the river to best Daniel Robertson´s A♠ 8♦. Arran Fletcher was unlucky to get busted in third when getting his chips in with A♦ Q♣ against Robertson´s Q♠ 9♥ – only to see a flop of 9♣ Q♦ 9♦ – while Nick Wealthall was the last of the bounties to be eliminated – leaving in sixth when his Q♦ J♣ were no match for Hyson´s flopped set of sixes.

Three side events supported the Black Belt Poker Main Event, and 175 players more than tripled the £750.00 guarantee when paying the £15.00 buy-in for the Friday night NL Hold´em Side Event – Wesley Davies making his trip to Nottingham worthwhile with a £866.25 pay-day.

The second supporting event on Friday was a £2,000 guaranteed deepstack tournament, which again saw the guaranteed blasted into site when 121 players paid the £50.00 buy-in to create a £6,050 prize pool. Jamie Green was the player who managed to keep his eyes awake the longest and scoop the £2,117.50 first prize ahead of Philip Mildon and Warren Wooldridge.

The £1,000 buy-in High-Rollers 6-Max did not have a guaranteed prize fund but nonetheless saw 27 players fork out a grand to play, with Ben Vinson capturing a well-deserved first position ahead of Stuart Fox, Matt Perrins and Jake Cody.